Able to equip a weapon in both hands to increase damage.

Doublehand (両手持ち or りょうてもち, Ryōtemochi?), also known as Two Hands, 2 Handed, Two-Handed, Two-handed, Dbl Grip, or Double Grip, is an ability that increases the power of one-handed weapons by holding the weapon with both hands. In other cases, said weapon simply requires two hands to wield.

The Two-handed ability is tied to weapons and simply requires two hands to wield them. All of Cid's Hammers and Edward's Harps are Two-handed, as well as the unused None sword. In the Super Nintendo version, the text that appears when the player attempts to equip a two-handed weapon on a character while they have a shield equipped or vice-versa is cut off. The popup message simply says "To equip", whereas the full message is "To equip with both hands". The formatting of the message is odd, because the coordinates for each line were never updated from the Japanese version, which centers the text.

The Two-handed ability appears on the Hammers.

Weapons that have the Two-handed ability are the Hammers and Harps.

Two-Handed is the level 3 ability learned by the Knight class for 50 ABP. It allows the character to use both hands when wielding swords, knight swords, katanas, axes, and hammers, as well as Staff, Morning Star, Flail, and Mace of Zeus. The ability increases the user's Strength to base Freelancer Strength +13. The player can still equip a weapon or shield in the other hand of the character, but the attack power will not increase. If one weapon is equipped, the other hand on the equipment screen will be grayed out.

A character equipped with the Gauntlet relic can equip a single-handed weapon in both hands to increase damage. Gauntlets can be found in Yeti's Cave and Kefka's Tower, and another can be obtained in the Returner Hideout by answering "Yes" to Banon. When one weapon is equipped, the left hand on the equipment screen will be grayed out.

Wield a weapon with both hands, increasing its destructive power.

Doublehand (also called Two Hands) is a support ability learned by the Samurai for 900 JP. It allows the wielder to use a weapon with both hands increasing attack power. A unit that uses this ability will have their two hands near each other in the equipment screen of the unit. All Bows requires two hands by default.

Doublehand is a support ability learned by the Fighter and the Gladiator from the Venus Blade for 300 AP.

Doublehand is a support ability learned by Fighters and Gladiators from the Venus Blade, it requires 250 AP to master and adds roughly 8 to Attack. However, units using Doublehand cannot Dual Wield or hold shields. The Viking class can learn it from the Greataxe.

Doublehand is the level 14 ability of the Paladin, learned for 380 AP. It requires 2 slots to use.

Doublehand is a Bravery attack for Bartz. It is a melee BRV attack. Mastery with 3 uses. Upon mastery it moderately boosts the ability.

Doublehand is a passive ability that allows to increase all of a unit's equipment's ATK by 50% when single wielding, although it also means that they cannot use shields or Dual Wield. It does not stack in the global version, does not increase percentage-based equipment like Hero's Ring, and does not work with bows, harps or guns. It can be obtained from Bartz's Trust Master Reward or innate passive of specific unit such as Garland.

In Bravely Default, Two-Handed is a support ability learned by Knights at job level 2. It doubles a weapon's physical attack, but the other hand must be free. It affects the following weapon types: swords, axes, spears, staves, and katanas.

In Bravely Second: End Layer, Two-Handed is the job level 2 support ability Knight. It doubles a weapon's P.Atk by holding swords/axes/spears/staves/katanas/greatswords with both hands. One hand must be free when equipping a weapon for this ability to take effect. Any job can equip it for the cost of 1 slot. 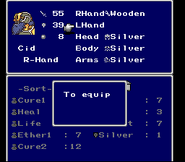 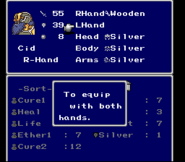 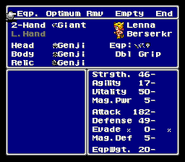 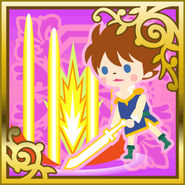 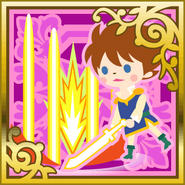 This gallery is incomplete and requires Final Fantasy IV: The After Years, Final Fantasy Tactics A2: Grimoire of the Rift, Final Fantasy Dimensions and Final Fantasy Airborne Brigade (Summon) added. You can help the Final Fantasy Wiki by uploading images.
Support abilities
Community content is available under CC-BY-SA unless otherwise noted.
Advertisement