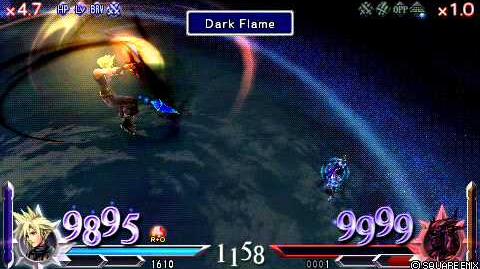 During battles in the PlayStation Portable Dissidia Final Fantasy games, a Double KO situation can arise, wherein both fighters run out of vitality at the same time, which can sometimes lead to an issue about determining who won the match. The best character to use for executing this bug is Garland in EX Mode, because he can use his HP attacks even if attacked.

When both characters execute an HP attack, sometimes, instead of the attacks canceling each other out and sending both characters into a stagger state, the characters will trade blows, sending both into a hitstun state, meaning both players give and take damage simultaneously. If both characters have enough Bravery points to deplete the other's HP, and finish one another off at the exact same time, this can result in a double KO scenario.

For a while, it was thought that in a double KO scenario the Bravery damage dealt decides the winner; however, it has since been proven wrong. Even if it was the deciding factor, it would still cause a problem if both characters dealt the same amount of damage. Currently, it is not known what goes on to deciding the winner in a double KO scenario; it might be just random. Unlike other fighting games, there are no time limits in Dissidia, matches do not span multiple rounds, and there is no "sudden death" tie-breaker round in the event of a double KO. In more traditional fighting games, such as Street Fighter and Tekken, double KOs, which result in draws, are counted as losses for both players.

If the player wins a battle via double KO in a gateway in Dissidia 012 Final Fantasy, they are back in the gateway with 1 HP afterward.