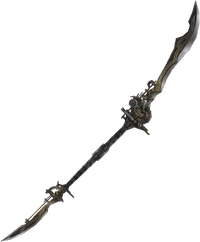 Double-bladed weapons, also called thief swords or dual-blades, are a type of recurring weapons in the Final Fantasy series. They bear two separate blades at each tip and have their own method of functionality. This sort of weapon, like the gunblade, sees its use in the hands of both playable and non-playable characters. Double-bladed weapons often, but not always, attack twice per action.

The Twin Lance is the first double-bladed weapon, appearing as a boomerang-type weapon and can be equipped by Freelancers, Thieves, Ninjas and Mimes. With its double blades, this weapon can attack twice in one turn.

Thief swords are a series of weapons unique to Zidane. The thief swords come with a status ailment imbued into them, but to inflict them, Zidane needs to use his Soul Blade Skill ability in combat.

Judge Magisters wield paired weapons, one short, and one long; separate, these weapons act like single-handed weapons, conjoined, they act akin to a double-ended polearm, with both blades' edges facing outwards rather than a cyclical parallel. One example is of Judge Gabranth, whose weaponry comprises of the Chaos Blade and the Highway Star.

They also feature weapons other than blades, such as Judge Drace's dual maces.

Fang wields spears bearing two spearheads. It can convert into a sansetsukon-nunchaku form.

Zantetsuken is also a dual-bladed weapon. It is wielded by Odin and Lightning during Gestalt Mode. 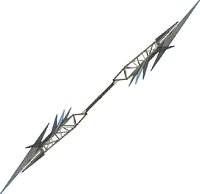 Dual-blades are a weapon type available to Lightning. They halve Lightning's Strength while providing the passive abilities Precise HP Restore and Stagger Power: -X%. While equipped with dual-blades, Lightning hits twice per attack.

Fang returns wielding the Bladed Lance, which is also an obtainable weapon for Lightning; however, it's classified as a standard spear and is used as such by Lightning.

Rem Tokimiya can combine her daggers into a double-bladed weapon when using her ability Dagger Boomerang.

Clarus Amicitia's weapon of choice is a double-bladed sword. 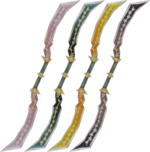 Zidane wields a pair of Mage Mashers, which combine into the Ogre. Gabranth wields the Chaos Blade and Highway Star.

Rem's HP Attack functioning as a long-ranged attack similar to the Dagger Boomerang ability from Final Fantasy Type-0, where she combined the two daggers and throw it like a boomerang.