The Dorky Face is an enemy in Final Fantasy VII fought in the Shinra Manor in Nibelheim. It is a floating enemy resembling a teru teru bōzu that is notorious for its penchant to confuse the party.

Dorky Face poses a moderate threat, as it often attacks in groups and can use Funny Breath which may inflict confuse on the party. It can use Curses to inflict Silence on one character. Its Ascend ability is only used when the player has three party members afflicted with Silence and paralyzed simultaneously.

The player can protect against Confusion with Peace Ring (obtained from Condor War's second battle) and by linking Added Effect with Mystify to a party member's armor. If the player does not have any resistance to Confusion, it is not recommended to use magic, as the character could end up using the spell against the party instead. As summons cannot be used against the party, using them is a safer way to attack if not silenced, though expensive to the party's MP.

If the player has leveled up Elemental to Lv2 they can exploit the Hidden element of the Dorky Faces' Curses and Funny Breath attacks by linking Elemental with any non-elemental Materia on the party's armor to protect against these attacks. Players do not gain an immunity to the statuses used; instead, the chance of inflicting the Status is dropped to 0, and the word "Miss" will always appear above their head, indicating that they are still vulnerable. A level 1 Elemental would halve the chances of the abilities inflicting their statuses, as opposed to nullifying them.

} Else If (All Three Opponents have Silence and Paralyzed Status) Then {

If (At Least One Opponent doesn't have Silence Status) Then
{

Choose Random Opponent without Silence Status
Use Curses on Target

If (At Least One Opponent doesn't have Paralyzed Status) Then
{

Choose All Opponents without Paralyzed Status
Use Funny Breath on Target 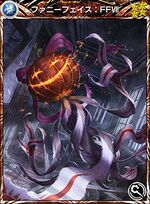