Yoshitaka Amano
Dorgann Klauser,[1] also known as Drogan Klauser,[2] is a historical character mentioned in Final Fantasy V. He was Bartz Klauser's father whose exploits inspired Bartz to become an adventurer himself. Unbeknownst to Bartz, Dorgann was a Dawn Warriors who dedicated his life to protecting the crystals, his family, as well as the world.

Dorgann was one of the four Dawn Warriors from Galuf's world, along with Galuf Halm Baldesion, Xezat Matias Surgate, and Kelger Vlondett. When the warlock Exdeath broke from a centuries-long seal placed on him by Sage Ghido, thirty years prior to the events of Final Fantasy V,[3] the Dawn Warriors fought back, eventually following Exdeath to Bartz's world and beating him. Because they were unable to destroy him entirely, they were forced to seal him, though Dorgann objected to the idea of leaving a demon from their world to another. As the warriors agreed there was no choice but to do so, Dorgann agreed, on condition that he stay behind to watch over the world thereafter.[4]

Dorgann then met his wife, Stella Klauser, and the two bore a child, Bartz. When Bartz was a child, Dorgann left often to travel the world and fight monsters,[5] still watching over the crystals. He still kept the crystals secret from Bartz, wishing he led a life without the burden of looking over the crystals.[6] Dorgann also taught Bartz the rare ability to intercept Kelger's lupine attack.[7] Stella fell ill and died while Bartz was young, and Bartz would travel with Dorgann.[5]

Three years prior to the events of Final Fantasy V, at the age of 51,[1] Dorgann passed away, his dying wish for Bartz to travel the world.[8]

Dorgann, Stella, and Bartz in their house in the town of Lix.

Dorgann talking to the Warriors of Light in the ending.

Dorgann is a gray-haired man who keeps his long hair in a pony tail. He has a gray mustache and wears blue armor and a violet cape. In his Yoshitaka Amano artwork he wields a silver longsword, black boots and tan trousers. His shoulder guard is in the shape of a skull of an animal and he is depicted besides the corpse of a monster. The sword Dorgann wields in his Yoshitaka Amano artwork is similar to one of the swords seen in the Onion Knight art from Final Fantasy III.

Dorgann cared for both the safety of the world as well as the safety of his family, dedicating his life to the protection of both. He took on responsibilities on behalf of others: volunteering to leave his past life behind and watch over the seal of Exdeath,[7] and then sheltering Bartz from knowledge of the crystals, believing they weren't "his burden to bear".[6] Dorgann enjoyed traveling with his son and loved his wife, being greatly affected by her passing.[5] However, Dorgann's secrecy from Bartz meant he grew up feeling he didn't entirely know his father, sensing that he was harboring a secret of some kind.

A man resembling Dorgann, currently just referred to as "Spirited Youth," appears alongside the game's version of Galuf and two others resembling the Dawn Warriors. He clothed in Firion's attire, an in game bonus item given as rewards to veteran players, which somewhat resembles Dorgann's armor from Final Fantasy V. 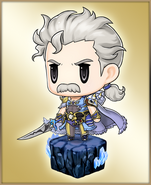 Dorgann is a playable character who could be initially recruited during the Challenge Event Heir of the Dawn as a First Time Reward for completing the event's Xezat's Fleet stage in Part 1.

In the GBA/PSP/iOS remakes of the original Final Fantasy, Drogan is one of the automatic names the player can choose for the Monk job.

Dorgann, along with the other Dawn Warriors, has a trophy/achievement named after him in Final Fantasy XIII, "Dorgann's Trophy".

In Dissidia Final Fantasy, the artwork for Bartz is in the same pose as Dorgann's original artwork. In addition, one of Bartz's exclusive weapons, Dorgann's Blade, is named after him.

[view · edit · purge]Klauser is a German family name derived from the medieval given name Klaus, short for Niklaus or Nicholaus, which means "people's victory".