Causes Shadow damage to all targets.

A similarly named ability also appears as a Dark Arts spell in Final Fantasy V. However, this spell is known as "Punish Ray" (パニッシュレイ, Panisshu Rei?) in Japanese.

Doomsday is used by Creator.

Vivi can use the Black Magic spell Doomsday, learned from his ultimate staff, Mace of Zeus. Clusters of asteroids and meteoroids gather in space to create a meteorite, which enters the atmosphere, colliding with the enemy and the surrounding area. It does a large amount of Shadow damage to the enemies and the party. It can't be reflected and works with Return Magic. The spell is learned for 150 AP, costs 72 MP to use, and has a spell power of 112.

Steiner can use Doomsday ("Jihad" in Japanese) as a Sword Magic technique, and it only affects enemies.

A powerful combo would be to equip the party with add-ons/armor that absorb Shadow, allowing the party to heal with every casting of Doomsday.

Doomsday is used by Hades and Ozma.

Doomsday is Ozma's most powerful ability when fought in The Weeping City of Mhach. To stop it from wiping the entire raid, player's must defeat the "Ozmashade" enemy during the parallel dimension of the fight.

In the Japanese versions, the ability name is Doomsday (ドゥームデイ, Dūmudei?), not the original "Jihad" from Final Fantasy IX. This is due to the game's development team using a reverse localization process for some of the ability names.

Final Judgment (最後の審判, Saigo no Shinpan?) was the summon attack of the Ozma Eidolon in the original free-to-play versions. The attack dealt dark-elemental magic damage to all enemies and allies. Despite the different name, the attack's animation and effect allude to the Doomsday spell from Final Fantasy IX. The ability was removed from the premium versions.

Doomsday is a reactive ability that costs 17 CP to equip. It is activated once in Battle Music Sequences (BMS) when the player makes a chain of 50 hits. It deals magic damage and reduces HP by 30% and has extra strength. It is learned by Celes (level 80), Vivi (level 65), Shantotto (level 55), and Lightning #2 (level 90). It can be taught to any character by using the Doomsday Scroll.

Doomsday (ジハード, Jihādo?, lit. Jihad) is a magicite ability available to the Hades esper. It deals two magic dark-elemental attacks to all enemies. It has a 10% chance of being used by Hades when his magicite is at its initial rank, however this raises to 40% after being fully maxed in rank.

Boundless Doomsday is the strongest attack of the Boundless version of Ozma. This version deals 99,999 damage to all targets.

Vivi's Super Soul Break, Doublecast Decay (W魔法・崩壊, W Mahō · Hōkai?, lit. Double Magic: Decay), is based on the Doomsday spell from Final Fantasy IX. It deals four magic dark-elemental attacks to all targets. It can be used with Vivi's Mace of Zeus (IX). If Vivi completes battles alive with the weapon equipped, he can eventually master Doublecast Decay without needing to be equipped with the weapon and will gain a bonus of 10 to his magic stat.

Doomsday usable by one of Vivi's cards. It requires the discard of a Vivi card, Dulling Vivi, and four Fire CP. It deals 7000 damage to each Forward. 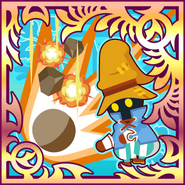 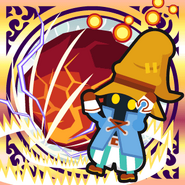 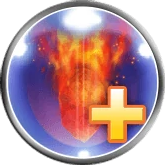 [view · edit · purge]Doomsday is comprised of the old English words dom and dæg meaning Judgement and Day. In Abrahamic religions, this refers to the time when God will descend from Heaven and judge the souls of mankind and will be rewarded or punished depending on the virtue of their souls.

The spell is called "Jihad" in Japanese. The spell name Jihādo (ジハード?), is also used as the Japanese name for the Final Fantasy VI esper, Crusader.

[view · edit · purge]"Jihad" refers to a method used by practitioners of Islam to wage religious warfare on non-Muslims; the Crusades were once viewed as holy wars, so the meaning is not significantly changed. Jihad's literal meaning in Arabic is 'struggle', and it is also a term to describe the inner conflict a Muslim undergoes to make him/herself a better person.

Doomsday summons a meteorite. In the context of myth and superstition, meteors and comets sighted in ancient and medieval Europe were once held as ill omen, said to be the message of the heavens' displeasure of man's affairs to herald catastrophes. The concept of a large meteorite being the potential catalyst of world ending destruction is a common story element in popular culture.