Doom (死の宣告, Shi no Senkoku?), also known as Death Sentence, Count, and Condemned, is a recurring ability in the Final Fantasy series. It inflicts the Doom status. The spell animation usually features the Grim Reaper or a skull.

Doom is cast by the Plague Horror,the Ahriman, and Zeromus An interesting fact is that getting hit by Doom when already under its effect will reset the character's remaining time to the base amount, stalling the character's death. Neither Haste or Slow affect the countdown, as the ATB bar runs off a completely different counter.

Curses one enemy to die in 30 seconds.

Doom is a Blue Magic spell for the Blue Mage. It can also be inflicted through one of the Oracle's abilities, but the Oracle's version tends to be a bit faster. It uses the Grim Reaper sprite in its effect.

An interesting trick to use end game is to use it on King Behemoths in the final dungeon, since the Oracle's version does not count as a spell, thus preventing the King Behemoth from using Meteor and killing it in roughly ten seconds while the party avoids significant damage. It costs 10 MP to cast, and can be learned from the enemies The Damned, Unknown, and Death Dealer, as well as the bosses Exdeath and Azulmagia.

Doom (also called Condemned) is a Lore for Strago, and costs 20 MP to use. It can be learned from Ahriman, Alluring Rider, Dark Force, Death Warden, Nelapa, Rest, Skull Dragon, Still Life, Yojimbo, and Zombie Dragon.

Pronounces death sentence on any one opponent

Death Sentence is an ability for the Enemy Skill Materia. It can be learned from the enemies Gi Spector, Sneaky Step, and Boundfat, and inflicts the Death Sentence status, in which a timer appears over the victim's head (60 seconds normally, 30 seconds if under Haste), and once the timer hits zero, the spell will attempt to inflict instant death. It costs 10 MP to cast.

Doom is a command ability that can be learned from Shiva once she reaches Level 10.

Casts Doom on the target.

Doom is a Blue Magic spell Quina learns from the Veteran or Ash. When Doom is cast, a mirror appears in front of the doomed character, and the Grim Reaper appears on its surface shining its red eyes before the mirror shatters. It costs 12 MP to cast and has a 25% accuracy. It can't be reflected and works with Return Magic.

Doom is one of Kimahri's Ronso Rage Overdrives. It can be learned from any of the Ghost-type fiends, or from Biran Ronso. This version of Doom is notable as it never misses on vulnerable targets and works on almost every enemy, including Nemesis in the Monster Arena. Though the stronger the target, the higher the counter starts at, taking 200 or so turns to count down from the most powerful enemies.

Yagudo bosses in Dynamis can use Doom, which inflicts a Death Sentence countdown. If the Yagudo is defeated before the end of the countdown it will state that the target has "narrowly escaped impending doom".

There are no Death Sentence abilities available to players.

This section about an ability in Final Fantasy XI is empty or needs to be expanded. You can help the Final Fantasy Wiki by expanding it.

Doom is a spell used by Eidolons, but only when they are first summoned by their respective l'Cie. It is cast immediately on the l'Cie at the start of the battle against his/her Eidolon. Once under the Doom status, the l'Cie must defeat and tame the Eidolon before the count reaches 0, or the battle will be lost. In addition, some bosses, such as Barthandelus, cast Doom after 20 minutes of battle.

Orphan will also cast Doom at the start of the battle but the counter is set to 4200 instead of 1700. There is no way to heal Doom, but it can be momentarily halted by summoning an Eidolon, as the counter won't deplete during summon time. The amount of given time depends on the battle speed, which can be adjusted in the config: in the fastest setting the character has 1700 units until instant death will hit, and in the slowest setting the time is 3600.

It should also be noted that bosses that have the Doom spell will not cast it on the player if their TP gauge is above 3 (and therefore able to summon an Eidolon). This only applies, though, to bosses in which the criteria to cast Doom is HP left.

Doom can be cast by Gorgyra and Long Gui. It will KO the affected character(s) when the timer runs out.

Long Gui will only cast Doom should the battle go on for more than 20 minutes.

Its success rate is:

Doom is an enemy ability that inflicts Doom and can be group-cast. It is used by Demon and Evil Idol.

This section in Bravely Second: End Layer is empty or needs to be expanded. You can help the Final Fantasy Wiki by expanding it.

Doom is a unlockable common debuff EX Skill. It generates a dark field of energy around the caster that instantly inflicts Break on all enemies within the field within 10 seconds unless the caster is struck by those affected by it.

Doom is an active ability that automatically KOs a single target when the countdown runs out for 5 AP. It can be used by Lich and Memecoleous.

It is also an enemy ability used by Memecoleous.

In the original Kingdom Hearts, a hidden boss in Neverland will cast a version of the spell that slowly counts down from 12 to the target party member's death. The countdown can be stalled by using Stop on the clock tower's face.

In Kingdom Hearts Re:Chain of Memories, the new third form of the final boss Marluxia uses Doom. Marluxia fires tendrils at Sora, and if they connect the player must break six of Marluxia's cards in six seconds or instantly die.

rapidly to free themselves within five seconds or die. 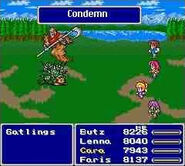 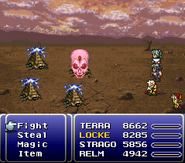 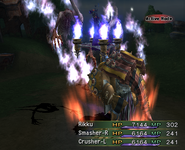 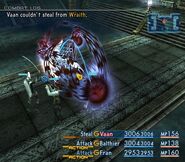 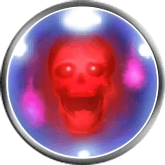