Neil Ross
Mayor Domino is a minor, non-player character in Final Fantasy VII. He is the mayor of Midgar in name only, as all the governmental power is held by Shinra Electric Power Company. Unsatisfied with his job, and disillusioned with the company he works for, he does not so much as question the identity of Cloud's group when they enter his office on the 62nd floor of Shinra Headquarters.

He offers Cloud the chance to guess the word he is thinking to get his keycard, a puzzle solvable with clues found in the library. If the player guesses correctly on the first try, Domino gives an Elemental Materia along with the keycard. If the player guesses the password on the second try, they get an Elixir, on the third time they get an Ether, on the fourth try a Potion, and if it takes more than four guesses to get the password, the player gets no item reward, just the keycard. In the English and Japanese versions one of four passwords is randomly chosen each game, although ORBS and HOJO are never the correct answer. In other localizations, MAKO is always the correct answer. In the localizations in which the password is variable, the password can be deduced by solving a puzzle involving the books in his library.

In Final Fantasy VII Remake, it is revealed that he is secretly a sympathizer of Avalanche, who wants them to overthrow President Shinra. He aids Cloud, Tifa and Barret to infiltrate the Shinra Building without their knowledge, by hijacking the security cameras, which explains why no alarm was activated. He helps them to get in the 64th floor, and later helps Wedge to infiltrate the Shinra Building as well.

Domino converses with the party in Final Fantasy VII Remake. 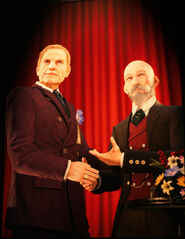