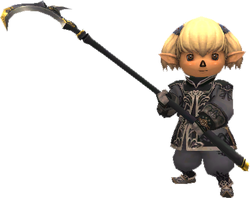 We shall teach the world a lesson it shan't soon forget: Our armies are unstoppable so do naught that you might regret! Go now with our blessings, we have adversaries to fell. Carry out that which does us proud and makes our spirit well! Ohohoho...O~hohohohoho!

Domina Shantotto (ドルチェシャントット, Doruche Shantotto?, lit. D. Shantotto) is a character and the main antagonist in Final Fantasy XI: A Shantotto Ascension - The Legend Torn, Her Empire Born. She attempts to set up the "Shantotto Empire" with the Tarutaru army she created.

Originally she and Belle Shantotto were the same Shantotto from Vana'diel in another dimension, until the Shantotto of the Vana'diel in Final Fantasy XI cast a spell that sent her in the other Vana'diel while summoning her parallel counterpart, splitting her into "good and evil" counterparts. After Aldo finds Belle, Domina offers her "sister" a somewhat stable truce so she can start the Shantottofication curse to turn every one into a Shantotto clone. However, the real Shantotto returns in time to stop it and convinces her splintered counterparts to return to their world, where they likely reintegrate back into their original form.

As of the twelfth Repeat Login Campaign, an alter ego of Domina Shantotto is available to adventurers as an ally summonable through Trust Magic.

While she does not appear in person, Domina Shantotto is alluded too via one of Shantotto's alternate costumes.