Upon the eastern banks of Othard lies Doma, the lands from which the ninja and samurai hail. Invaded twenty-five years ago by the Garlean Empire in their relentless effort to expand their borders, this once-peaceful nation now struggles under the imperial yoke. In the wake of a recent large-scale uprising that ended in failure, a majority of the civilians have been stripped of even their most fundamental freedoms.

Doma is a kingdom in Final Fantasy XIV accessible in the expansion Stormblood. Located in the fertile land of Yanxia on the continent Othard, it was a vassal to the Garlean Empire, now occupied by an imperial viceroy and her host of brutish men. Citizens struggle to survive in the face of oppression in the form of punishing taxes and grueling physical labor.

Though Doma is of the Far East, the nation is considered a part of the Eorzean Alliance, making it an unofficial member or at least a very close ally.

Located in the region of Yanxia, the kingdom is situated along the One River, which has provided the Domans with fresh fish. The banks are considered to the most fertile farmland in all of Yanxia, and the people live off the land growing rice crops, along with plums and persimmons. Doman paper is favored the world over due to its durability and beauty; it is used in important documents, scrolls and artistic crafts, such as fans, lanterns and other elaborate displays.

Domans practice their faith in private and won't judge others for not sharing in their beliefs. They believe in a host of spirits known as the kami, which can be personifications of nature, enlightened sages, and long-lived animals of legend.

Doma's long history began with Ganen Rijin. At the age of fourteen his father died in battle and he became the leader of his clan. He understood they would be attacked by one of the other aggressive clans and so devised a plan. When one of the clans invaded their territory they chased the Rijin and ended up in the wetlands. Weighed down by their plate mail armor, Ganen commanded a host of archers to rain down arrows on their foes.

Ganen was a powerful and merciful leader. When he was young he learned geomancy from a hermit, and had a disregard for birth and background, accepting any and all into his service as long as they possessed the ability and wisdom. He showed mercy to his defeated enemies and earned their respect and loyalty, bolstering his armies' ranks. Within the span of twenty years the Rijin clan came to control the One River's eastern bank. Clans on the western bank feared this expansion and assembled a massive army in preparation for war. They fought for eight long years, but Ganen gained the upper hand with aid from Namazu messengers and spies. Having united all of Yanxia under one banner, the kingdom of Doma was born.

The conflict with Seien[]

Three hundred years ago King Seien ruled Doma. Due to his brash and impulsive nature he hosted galas day and night, running Doma's coffers dry and taxing the people. Sasuke, a shinobi of the Kagekakushi clan, was moved by the people's plight and sought out Shoen, Seien's younger brother, and freed him from captivity. Together with a rebel army they overthrew Seien. Fearing something similar may happen again, Shoen bade Sasuke stay in Doma and saw the shinobi as a check against tyranny. He agreed to his proposal and soon founded Shino-bi-no-sato deep in the mountains of Yanxia, where he trained others in the art of ninjutsu.

During the reign of Kaien Rijin, the Garlean Empire invaded Yanxia from the west, and attacked from the One River with support from the newly formed Castrum Fluminis, as well as massive airships. Doma surrendered, and was ruled over for twenty-five years. Although Kaien collaborated with the Garleans as deputy viceroy, he secretly coordinated the Liberation Front. News spread that a war of succession had broken out in Garlemald, following Emperor Solus's passing without a named successor. Domans rebelled and drove the Garleans out of their lands. The Garlean war of succession ended quicker then expected, and Zenos yae Galvus led the XIIth Imperial Legion to Doma to crush the rebellion and kill Lord Kaien. His son, Hien Rijin, was thought to have been killed during the rebellion, but in truth went into hiding, leaving Doma in Garlean hands.

The Doman Liberation Front remains determined to free its homeland from the Empire though their numbers remain few and without public support. Zenos has been made viceroy of Ala Mhigo, and named Yotsuyu goe Brutus acting-viceroy of Doma for her seething hatred for her homeland and people. Zenos thus relied on her to break the Domans to prevent future rebellions. Yotsuyu's actions led to feelings of hopelessness and fear in the Doman people. Many found life in their imperial-controlled home to be a lost cause and left for Eorzea as refugees. The Liberation Front continues to hold out and remains hopeful that Hien will return to lead them to freedom.

In Eorzea, the Scions of the Seventh Dawn along with the Eorzean Alliance campaign to liberate Ala Mhigo, but face defeats at the hands of Zenos himself, having even defeated the Warrior of Light and Resistance fighters. At the Warrior of Light's suggestion, the Scions travel to Doma to reignite the flames of rebellion, forcing Zenos and the XIIth Legion to fight on two fronts, giving the Resistance and Alliance a better chance to liberate Ala Mhigo. The Scions reunite with old friends and make new allies, among them the Confederacy and the Kojin, in their fight to free Doma and rekindle the spark of pride and honor within the people to free themselves of imperial control.

With proof of the people's desire for freedom, the Scions travel with the Liberation Front to find Hien and convince him to return to lead the fight. Hien and the Scions win the allegiance of the Xala Tribes of the Azim Steppe, increasing their strength. The plan is for the Liberation Front and its allies to divide the Garlean forces while the Scions and Hien battle to the top of Doma Castle and capture Yotsuyu. While the operation succeeds, Yotsuyu refuses to surrender and brings down the Keep to kill her foes. Gosetsu Daito holds the crumbling keep long enough for his friends to escape, at the seeming cost of his life.

The Garleans retreat and the long task of rebuilding Doma after a quarter century of imperial rule begins. Domans swear to aid their Eorzean allies for all the support they have provided and help the Alliance in their battle to liberate Ala Mhigo. Hien and his allies yet fear a second Garlean invasion. Though a spark of hope for peace is made with Asahi sas Brutus's arrival to negotiate, it becomes clear he is an agent of a newly "resurrected" Zenos to find Yotsuyu and frame the Domans to summon a primal. He restores Yotsuyu and convinces her to summon, forcing the Warrior of Light into the fray. The primal is slain, Yotsuyu kills Asahi, and Domans complete the negotiations with Asahi's second-in-command, Maxima.

The Empire has become more aggressive in the wake of conquered nations rebelling after Doma's and Ala Mhigo's liberations. Hien calls out to the other nations of the Far East and imperial conquered provinces to stand against the Empire with the Eorzean Alliance. To gain the time needed to prepare, Doma commissions Garlond Ironworks to create a magical barrier between Doma and the Empire at the Burn using Allagan technology. After fortifying his homeland's defenses, Hien meets with the Eorzean Alliance leadership and the Scions to discuss a possible way to defy the Empire. They agree to spread rumors about the newly "healed" Zenos being possessed by dark forces to allow dissenting factions to seize control, threatening the Empire with a second war of succession.

With the barrier's completion, Doma lends its forces to Ala Mhigo's defense as the Empire launches an offensive to re-conquer the nation. The battle between the six nations and Garlemald reaches a stalemate as the Garleans pull back in the wake of dissenting rumors within their homeland.

"Cyan's Theme", originally from Final Fantasy VI, plays as the character theme for Hien and Doma as a whole. "Gates of the Moon" plays during the liberation of

Naoki Yoshida has confirmed that Doma's culture and settlement are based on Japan, and once Doma starts trading with Eorzea in the future update, more Japanese-style items, equipment, and furnishings will appear in the game.[citation needed]

The Ninja class has its origins in Doma.

The city and the castle of Doma.

The emblem of Doma, displayed in the hall of Kienkan. 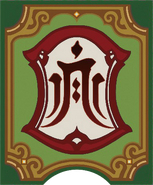 The name "Doma" alludes to the Kingdom of Doma from Final Fantasy VI, both having connections to samurai. The Doman king, Kaien, and the prince, Hien, allude to Cyan Garamonde and his son Owaine from Final Fantasy VI. Kaien's name is based on the romaji of Cyan's Japanese name, Cayenne (カイエン, Kaien?), while Hien's childhood name, Shun, is based on Owaine's Japanese name, (シュン, Shun?). "Cyan's Theme" plays as Hien's character theme.