Dolphin Flurry is Tifa Lockhart's level 2 limit break in Final Fantasy VII Remake. It is a physical attack that hits an enemy for significant damage over several attacks, and significantly increases an enemy's stagger gauge. As a limit break, it requires no ATB to use.

Dolphin Flurry comprises a combo of several attacks. Tifa opens by slamming on the ground and kicking overhead. She continues by leaping to the air and spinning, creating a wave in the air while dealing several hits of damage. She concludes with an uppercut punch from which a dolphin appears, dealing tremendous damage.

Dolphin Blow was Tifa's first level 3 limit break in the original Final Fantasy VII where her limit breaks are performed in a combo, in which Dolphin Blow is the fifth of seven.

Dolphin Flurry is obtained from the Legacy: Dolphin Flurry manuscript. This is earned at the Corneo Colosseum by completing the challenge "Tifa vs. Wild Animals" available during chapter 14, "In Search of Hope".

The different hits also have various effects. The first three hits, and the final hit, cause launch. The fourth to twelfth hit each have a knockdown effect.

Dolphin Flurry deals more damage than any other limit break, being slightly ahead of Ascension and Catastrophe.

Dolphin Flurry deals immense damage to a single target spread over several hits, and also damages nearby enemies. It has a fairly long animation time, providing time during which Tifa is effectively immune to being interrupted and will dodge most damage. Because Dolphin Flurry requires no ATB to use, there is no penalty to using it, except for when an enemy is under

Shield or heavily resists physical damage. It also should not be used on enemies about to leap out of danger. Because it deals physical damage, its damage is based on Tifa's

Dolphin Flurry can be used to greatly increase an enemy's stagger gauge. Though it can alternatively be used during an enemy's stagger when they will take bonus damage, this may be an inefficient use of Tifa whose best role during stagger is to increase bonus stagger damage with her Unbridled Strength techniques, allowing her and other characters to deal heavy damage to an enemy and optimize time they are spent staggered. Dolphin Flurry has a long animation time, and stagger does not last long enough for Tifa to effectively use the time to both increase stagger damage and deal damage of her own. Casting

Stop can allow Tifa to do both, as her Rise and Fall and True Strike can increase stagger bonus damage to over 200% and give her time to use Dolphin Flurry if she has the luxury to.

Compared to Tifa's level 1 limit break, Somersault, Dolphin Flurry deals considerably more damage, and has the bonus of increasing an enemy's stagger gauge. The main drawbacks are its long animation time, and that the limit gauge takes longer to fill. This can also be detrimental to

Refocus Materia if she uses it, as it will also mean Refocus takes longer to use. Overall, the trade is normally worthwhile, as Dolphin Flurry plays well into Tifa's playstyle, though she should equip an accessory to increase the limit gauge as she does so. 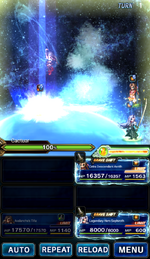 Dolphin Flurry was Tifa's third-most popular ability among survey respondents at 11%, below Starshower at 38% and Unbridled Strength at 13%. The user comment for a respondent listing Dolphin Flurry as their favorite ability referred to its satisfactory use when powered up with Starshower.[1]