Doga's Village, also called Dorga's Village, is an optional area in Final Fantasy III. It is populated entirely by Black Mages who sell a vast assortment of spells. It cannot be reached until the Nautilus gains the ability to go underwater.

To access Doga's Village, the player must dive underwater off the south shore of the Dalg Continent and look for a recess in the island. Moving into the alcove and surfacing in the lighted water causes the player to emerge in a small lake next to the town.

The background theme that plays at Doga's Village is called "Amur". 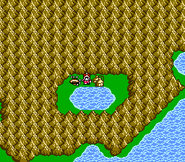