Doga's Manor, also known as Dorga's House, is the home of Doga in Final Fantasy III and is located in the middle of the Dalg continent. It is populated only by Doga and Moogles.

There is no Inn, but there are HP/MP and Revive Wellsprings in the form of a book on a table and a pot, respectively. They are located in Doga's room. There is also a room to summon fat chocobo.

After obtaining the Nautilus in Saronia, the Warriors of the Light are able to sail through the heavy winds of the Dalg continent and reach Doga's Manor. Upon entering it, they are attacked by moogles, the private guards of Doga, one of the apprentices of the Great Magus Noah. There, he explains Xande, a former fellow apprentice who was given mortality by Noah, is responsible for halting time and disrupting the balance between Light and Darkness.

Doga then accompanies the Warriors through the Cave of the Circle and casts a spell on the Nautilus, allowing it to go underwater. Then he casts a spell on the party so that they may leave the area while he goes to another dimension to find the key to Eureka. It is said that he contacts Unei in the dreamworld on this same dimension.

Later, after obtaining all the fangs that grant passage though the guardian statues that block the way into the Ancients' Maze, Doga and Unei summon the Warriors of the Light. At Doga's Manor, they open a portal to Doga's Grotto for the Warriors, where they are forced by the Wizards to fight against monstrous versions of both, so as to gather energy for the keys to Eureka and Crystal Tower. 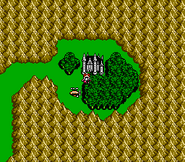