Yuna on her dog Kogoro in Final Fantasy X-2

Dogs (イヌ, Inu?) are recurring animals and pets in the Final Fantasy series. Sometimes canine beings appear as monsters or otherwise magical beings, like summons, such as Fenrir and Cerberus. However, this article focuses on dogs as pets and regular animals in the Final Fantasy series, although if they aid the party in battle as faithful companions, they are often seen performing lavish attacks no real world dog could do. Dogs are more common in the games that take place in modern worlds.

Interceptor is Shadow's loyal dog, and does not leave his side. He resembles a Doberman Pinscher, Beauceron, or a mix of the two. Shadow likes to claim that Interceptor eats strangers, and he can be ruthless at times, especially when Shadow is in danger, but he is friendly to Relm Arrowny.

In the beginning of the game, two Narshe guards use two dogs (possibly Silver Lobos) to track down Terra to Arvis' home. In the World of Balance, a hunter and his dog are seen in Mobliz who hunt on the plains of the Veldt. Barking dogs/Lobos can be heard in one of the music tracks that plays in Narshe. Bored Imperial soldiers stationed in Maranda make two dogs fight each other for gambling. The Gestahlian Empire has Imperial guard dogs: Vector Hound, Doberman, Hunting Hound, Belzecue and the heavy armored dog Fidor. These dogs often accompany the Empire's ground force and fight alongside the soldiers. Don is a hound that was created as a test of Magitek power. In the World of Ruin, two dogs stand guard at the entrance of Mobliz to warn the residences of incoming travelers.

There two types of dogs: the long-eared brown dog, and the pointy-eared and nosed gray dog.

In the Beginner's Hall in Sector 7, a talking gray dog tells the player the controls and introduces them to the position cursor. This dog, the miner, and some of the other people here, reappear as ghosts in the "Beginner's Hall (Advanced)" in the Respectable Inn beneath the barracks of Lower Junon.

A brown dog is found in the Sector 5 Slums before the plate falls on Sector 7, but is nowhere to be found after. A brown dog stands still in a spot by the well in modern Nibelheim and is the only thing remaining outside after the cloaks' migration. A brown dog sits in the shut closet under the stairs of the Old Man's House in Kalm. He moves to his owner when interacted with.

There is a brown dog in the lower path inside Junon that blocks a doorway. The dog will only move if the player's submarine is destroyed during the mandatory minigame. In this case the player can return to Junon where some soldiers guarding the Junon Submarine Dock instruct the player that to enter they must talk to their dog, before dying valiantly in battle. Interacting with the dog will lead the player to another submarine: a red one. The player can choose to take the dog on board or let it scamper off.

A brown dog lives in the Rundown Hut in North Corel. A brown dog roams around outside the north section of Wutai (except during the scene with the Turks when the townspeople are in hiding). A brown dog sits outside in Icicle Inn. A gray dog in Mideel stands in the street and follows the player around when interacted with. It is while Tifa stops to talk to this dog that she overhears two elderly people discussing that a man with glowing eyes had washed up on the shore. A brown dog lives in the Old Man's House in Mideel. If the player steals the item and tries to leave he will bark. The gray dog appears and has the same behavior in the destroyed Mideel, the brown dog is absent.

During the time Tifa is in a coma for seven days after the release of the Weapons from the North Crater, she dreams of the time she found Cloud at the Sector 7 Slums train station. Cloud was being inspected by a brown dog and the Train Man. The dog started watching Tifa, and went berserk when Cloud reanimated from his stupor.

The Bird room of the Debug Room has a gray dog that deals with events concerning Junon.

Stamp is a hound mascot Shinra Electric Power Company has repurposed for propaganda purposes. Avalanche uses graffiti of Stamp (created by Finn) as landmarks to find their way in the labyrinthine Midgar.

Dogs are also seen around the slums, and Marle has one, often seen behind her when she is at the Stargazer Heights.

Yuffie Kisaragi must sneak by this dog during "The Happy Turtle Ad Campaign". Shinra also uses genetically enhanced dogs as part of their Public Security forces, and Rufus Shinra keeps one such breed as a pet.

The main dog is Angelo, Rinoa Heartilly's pet. Angelo resembles an Australian Shepherd, and is two years old. She accompanies Rinoa for most of her journey, helping her and the others in battle when the need arises. Rinoa can teach Angelo new tricks by reading the Pet Pals magazines and selecting the new skills to learn in her Status menu. Angelo functions primarily as Rinoa's Limit Break, called Combine, which has Angelo perform one of four aggressive tricks. The trick performed depends upon the party's current Crisis Level.

Angelo's passive tricks may activate during battle without player input: (a) as a counterattack against an enemy that has inflicted direct damage to Rinoa; (b) as recovery countermeasures for any party member in HP Critical or KO status if Rinoa is present; and (c) to search the battlefield for random items.

Other dogs include a dog in Dollet that bothers Seifer during the party's wait on the town square. The player can save the dog from X-ATM092 by interacting with it during their escape from the mech. Failing to save the dog deducts points from the SeeD exam score. The dog is later part of a sidequest in Dollet where a boy at the local artist's studio paints a bone into the artist's paintings indicating the dog's location. If the player finds the dog after this, they get an item. If the player waits till after the Battle of the Gardens with the quest, they get better items as rewards.

Some dogs appear in towns. In Treno, Mogrich the moogle is being chased by one in circles, but if talked to, assures that the dog is friendly and that they are just playing. The dogs commonly say "bow-wow" when talked to. They have large heads in comparison to their bodies and are brown and white.

Dogs in Spira can be found among the decks of the ships (after obtaining Ixion), Besaid Village, Luca's Square and City Limits, and among the monks at Macalania Temple.

The dog in Besaid Village can yield a second Overdrive for the aeon Valefor. After the party first leaves Besaid Village and Wakka gives Tidus the Brotherhood sword, the player can return to the town and talk to the girl behind the counter at the shop. The player should then go to the furthest house on the right side to spot the dog that will yield Valefor's second Overdrive. This is best done as soon as possible, as later when the party has an airship, the town will be guarded by Dark Valefor.

The aeon Yojimbo also has a dog called Daigoro, but it is more of a supernatural variety than a regular dog. Yojimbo's dog is an actual dog that was made into a fayth; this is the only known case of an animal being made one. A dog based on Daigoro makes a return as Yuna's dog in the sequel (see below).

Kogoro is Yuna's dog while she uses the Trainer dressphere. Kogoro is an orange dog with purple tufts of fur and gold markings on his head, shoulders and tail. Kogoro resembles Yojimbo's pet Daigoro. This is play on words, as dai means "big" and ko means "little" in Japanese. Trainer is one of the few dresspheres that has a unique skillset and stats for each girl, because they each have a different pet. As a Trainer, Yuna can command Kogoro to perform various abilities.

Dogs were part of society in Cocoon where they were kept as pets, and even if the world has greatly changed since then, some dogs are still around. "Dog, Doctor and Assistant" is a quest on the Wildlands that involves a dog. At the Research Camp Lightning meets Thirteen, Dr. Gysahl's assistant, tending to an injured dog. Thirteen and a woman named Tilda need Lightning to gather ingredients for a medicine. After gathering the ingredients Tilda gives Lightning an Animal Potion. The dog again becomes relevant in the quest "Mother and Daughter". Brella is a woman outside the Wildlands monorail station and telling her of the healed dog reunites the owner with her pet.

The dog is a recycled model from a dog in Final Fantasy XIII that appeared on a beach in Bodhum.

Lunafreya Nox Fleuret has two spitz-type dogs: the white Pryna and the black Umbra. They are Messengers, mystical supernatural beings that choose to appear as dogs. Umbra delivers the Lovers' Notebook between Lady Lunafreya and Prince Noctis, and can be called at a lodging from Chapter 9 onwards to return to the open world portion.

Dave has a brown dog that accompanies him to towns. The player knows Dave is around when they hear a dog bark when entering an outpost.

Cerberus is said to be Ardyn Izunia's "pet", but it is a daemon.

During the party's journey Prompto Argentum swerves the Regalia to avoid hitting a puppy. He makes a stop and rushes out to tend to it, the encounter sparking a flashback on how he had once found Lunafreya's puppy lost in Insomnia: Pryna. After helping the puppy it returns to its mother in the woods on the side of the road.

In the short film made to promote Final Fantasy XV, Noctis follows what appears to be Lunafreya's dog Pryna through various dreamscapes, but the dog turns black and scorched with fiery eyes, suggesting Noctis had been led astray by demonic influence. 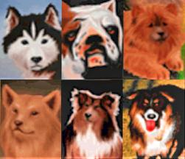 The dogs from the Pet Pals magazine in Final Fantasy VIII.

Concept art for a dog for Final Fantasy IX. 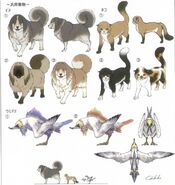 Dog on a beach in Final Fantasy XIII.