Where should I start...? First, your beard! Second, your nerdy hat! Third, your thick eyeglasses! All signs of a nerdy philosopher!

Doctor Tot is a scholar and Princess Garnet's childhood tutor from Alexandria Castle in Final Fantasy IX. He now resides in Treno where he lives in an observatory tower.

Doctor Tot is diminutive in stature and his most prominent feature is his large beak-like nose upon which sit the large round spectacles that obscure his eyes. He has bushy brown mustache and hair and always wears a tophat styled with a belt and a buckle. He wears a burgundy and white scholar's robe with matching white trousers and a burgundy waistcoat, the ensemble finished with a blue necktie.

Tot is the archetypal scatter-brained academic with thick glasses and a constantly-wandering train of thought. He remains one of the princess's most loyal friends and aids the party multiple times.

Doctor Tot was given a position in Alexandria Castle when he was 30 years old. Thirteen years later, he discovered a 6-year-old girl washed ashore in Alexandria.[1] The girl became a replacement princess for the recently-deceased Princess Garnet (the girl who had washed ashore having lost all memory of her previous life). A year after the "switch", Tot became the new Princess Garnet's tutor. He remained her tutor for 8 years, until she was 15.[3] Queen Brahne dismissed him in February 1799 and a month later he moved to Treno.[1]

Doctor Tot now resides close to the Treno Card Stadium. After Garnet absconds the Alexandrian Castle to travel the world and solve the mystery of her mother's changed behavior, she comes to Treno to help Marcus procure Supersoft to heal his friend. They sneak into a noble's basement and Garnet discovers the house belongs to Doctor Tot, her former tutor. Tot gives them the Supersoft willingly and shows Garnet a secret passage back to the castle.

When Garnet returns from her excursion to the Outer Continent, she has discovered her true heritage as a summoner and brings a young summoner girl called Eiko Carol with her back to Alexandria. Tot becomes intrigued and helps Eiko write a love letter to Zidane Tribal, leading to an amusing chain of misunderstandings when the letter falls into wrong hands. Tot says Garnet was once similar to Eiko after the latter voices her wish to be more like Garnet. Tot is stunned by Eiko's casual revelation that she is from Madain Sari, and his musings on summoners, the four jewels, and the summoners' village reveal much of Garnet's history, explaining how she came to live in Alexandria, as well as the connection between jewels and eidolons.

Doctor Tot has long been a fan of the card game Tetra Master, and when Zidane and his friends come to Treno to take part in the tournament, Tot gives him more cards should he run low.

Doctor Tot helps diagnose Garnet once she has lost her voice and says she needs calm before she can return to normal. He also unsuccessfully attempts to cure Regent Cid who was trapped in the form of an oglop.

Doctor Tot is mentioned together with Garnet's in a letter sent by "Kathy".

Searching for the real you? Princess Garnet's tutor "Doctor Tot" would be perfect for you, kupo! He may be small in stature, but he knows everything, and gives the best advice! Today's lucky place? The "M.S Prima Vista," kupo!

Doctor Tot appears as an opponent in PlayOnline's Tetra Master.

Baku is never able to remember Tot's name, instead calling him Tootsie, Toot, and Ted.

In the GBA/PSP/mobile remakes of the original Final Fantasy, Tot is one of the automatic names the player can choose for the Red Mage job. 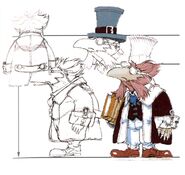 Tot's name may derive from Thoth, the Egyptian god of magic and knowledge.