After completing Trials:
From Chamber of the Fayth after gaining airship:

Djose Temple, also known as the Lightning Mushroom Rock, is a location from Final Fantasy X and Final Fantasy X-2. It is one of the temples of Yevon that lies on the way of a summoner's pilgrimage. The temple is concealed beneath rock most of the time, but when a summoner is addressing the fayth, the rock face is repelled from the temple surface by surges of electricity that holds the stone in steady orbit. During the events of Final Fantasy X-2, the temple is the base of operations for the Machine Faction.

When Yuna's party arrives at Djose Temple, they notice the temple already has a summoner inside. By the side of the front door, they find Gatta or Luzzu, depending on who survived Operation Mi'ihen, mourning the loss of the other before ultimately heading back to Besaid.

The party encounters a rival summoner Dona who derides Yuna for needing such a large following of guardians, which now includes Sir Auron, while she only needs one. Yuna defends the value of her friends, while Dona is enraged when Barthello asks to shake the hand of the legendary guardian, Auron. They meet another summoner named Isaaru and his guardian brothers Maroda and Pacce, who tell Tidus about a rumor of summoners on pilgrimage disappearing, and warn him to be careful.

The party completes the Cloister of Trials and gains access to the Chamber of the Fayth where Yuna prays for the fayth and obtains the temple's aeon, Ixion. The party stay at the inn overnight to continues the pilgrimage the next day. Yuna oversleeps and is late, her guardians poking fun at her disheveled hair.

Later on, if Tidus convinced Dona to stop her pilgrimage, she'll be found outside the temple with Barthello after gaining the airship, though the area can only be accessed after the meeting with Grand Maester Mika in Bevelle. Tidus and Yuna tell Dona that they found a different way to destroy Sin, and Dona wishes them luck before leaving with Barthello.

The temple has been abandoned by the priests and Yevonites after the beginning of Yuna's Eternal Calm. Sometime thereafter, the Machine Faction, led by Gippal, moved in and made the temple their base of operations. When fiends start pouring out of the temples, Djose Temple does not initially want to ask help from the Gullwings, but eventually they relent. One Al Bhed tells Rikku that Gippal is missing, and the fiends have begun to merge with the machina. The Gullwings enter the temple to find the possessed Ixion. After Ixion is defeated, it explodes, causing Yuna to fall into a deep hole in the middle of the Chamber of the Fayth where the fayth statue used to be located.

In Chapter 5, the faction brags to the Gullwings that their Experiment machina is unbeatable. The Gullwings accept the challenge and defeat the Experiment, but they destroy it. Yuna apologizes to the Al Bhed, but he forgives Yuna since they can simply repair it. The party can find five repair manuals to help repair the Experiment. They can excavate for spare parts in the Bikanel desert to upgrade the Experiment to its fullest capability. However, the Experiment goes out of control when upgraded to its full power.

The trio destroys the full-powered Experiment and Rikku realizes that Paine can speak Al Bhed. She wonders where she learned the language, and learns it was from Gippal. Though Rikku accuses Gippal of being a player, Paine says that she thought learning another language would broaden her horizons, but says it didn't work since she needed to open herself up. Rikku does not understand it and Paine simply says that her travels with Yuna and Rikku helped her change a lot. When Yuna says she had assumed they were bothering Paine, Paine says that she never shuts up and describes how she was ready to hurt them at first. Yuna pretends to be offended, and runs off with Rikku, making the confused Paine run after them.

Aim: To complete the glyph in the center of the main room.

Note: If the pedestal did not have two spheres inside and is pushed into the field, it can be teleported back by stepping on the shining tile to the left.

Note: This is a compulsory mission, which is required to complete the game.

Eliminate the fiends that have appeared inside Djose Temple! Be careful, though. These fiends aren't to be taken lightly.

This mission is part of Chapter 3.

This mission can be undertaken in Chapter 5.

Word is, the Machine Faction and Rin are launching a survey of the Farplane.

After defeating the most powerful Experiment, Paine reflects on how far she has come since joining the Gullwings.

In Final Fantasy X-2, the theme that plays at the Djose Temple is called "The Machina Faction".

Luzzu's body can be seen lying on a bed in the inn, but he is also seen standing outside near the temple if Gatta was told to go to the front lines. 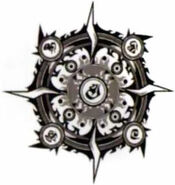 Bridge to the temple in Final Fantasy X.

The save sphere and the inn.

Chamber of the Fayth in Final Fantasy X.

The Machine Faction using Djose Temple as their headquarters in Final Fantasy X-2.