Hah hah hah hah! Your bauble has no power over me now that I am infused with the power of darkness!

Djinn, also known as Jinn, is a minor antagonist in Final Fantasy III and an early boss.

Cave of the Seal

Djinn placed the village of Kazus and Castle Sasune under a curse which turned its residents into ghosts. The only way to remove the curse is for the Djinn to be sealed in the Mythril Ring, which Princess Sara sets out to do. Djinn is resistant to the ring's effect, and it takes the Warriors of the Light to weaken him enough to be banished.

He is weak against Water and Ice spells and items; players should use Blizzard, s, and/or Antarctic Winds, but regular attacks will also suffice.

In the 3D version, Djinn can act twice per turn and can cast magic or use a powerful physical attack. The player should split healing through all the characters, while one exploits his weakness: Blizzard and Antarctic or Arctic Winds. In fact, 2 or 3 Antarctic Winds can kill him at the start of battle. 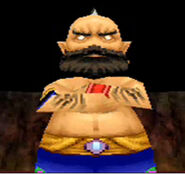 Djinn as he appears in the DS remake.

Djinn in the Manga.

[view · edit · purge]The jinn, also spelled djinn, or genies, are spirits mentioned in the Qurʾān and Islamic theology who inhabit an unseen world in dimensions beyond the visible universe of humans. Together, the jinn, humans and angels make up the three sentient creations of God.