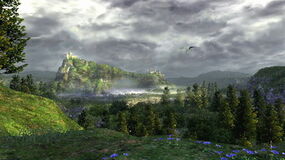 "Distant Worlds" is the ending song of the expansion pack of Final Fantasy XI, Chains of Promathia, available in game via a July 2005 patch. It was originally performed by Izumi Masuda.

"Distant Worlds" was included in The Black Mages' third studio album, The Black Mages III: Darkness and Starlight, atypically arranged as a slow-paced instrumental rock ballad. It has been performed live numerous times and included in the concert albums Distant Worlds: Music from Final Fantasy (as a medley along with "Memoro de la Ŝtono" where it was performed by Susan Calloway and VOICES: Music from Final Fantasy. It also appears as the tenth track on the compilation album Final Fantasy XI 8th Anniversary: Memories of Dusk and Dawn, which celebrates the eighth year of Final Fantasy XI.

Seas invite in the evening sun
To light the somber abyss.
Clouds dance up with the heavens' stars,
Chanting an air of joyous bliss

Water fades back from blue to jade,
Guiding young rainbows high.
Flowers bloom into reds and whites,
Quenching our hearts as they run dry.

Angels chained by a beast locked in slumber.
Sin washed away by the swift flow of time.

I may know the answers.
Journeys over snow and sand.
What twist in fate has brought us
To tread upon this land?

Blessed by light and the burden of shadows.
Souls abide to an endless desire.

I may know the answers,
Though one question I still hear.
What twist in fate has brought us
To roads that run so near?