Cid Pollendina: Oh, shut up and help me remodel the Dissidia Final Fantasy NT stages page!
Please expand this article into a full one. The following tasks need to be completed:This request can be discussed on the associated discussion page. Remove this notice upon completion.

The stages have little to no stage hazards and are more spacious to accommodate the 3 vs. 3 system.

Each stage features a change in atmosphere after half the battle time has passed, or if either opponent's HP gauge is depleted by two-thirds. They reflect the changes in that stages' original series, but otherwise do not affect battles.

When a summon is used in battle, the stage is filled with mist and changes color depending on the summon used. 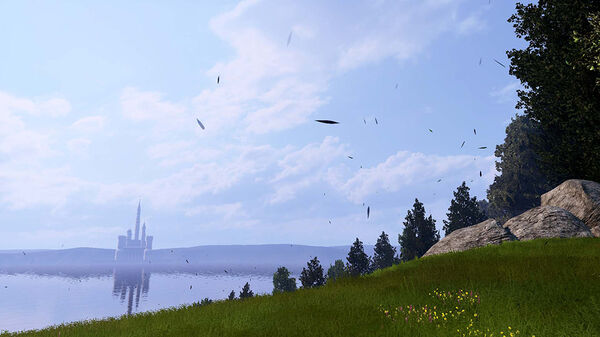 The warriors of light began their adventure on this grassland, looking across the vast lake and back upon Castle Cornelia.

The hill overlooking the kingdom of Cornelia is where the Warriors of Light begin their journey in the original Final Fantasy, serving as the battleground. Cornelia features a grassy area with small cliffs edging out, and a forested area used for avoiding attacks and to Quickmove on the trees.

During the stage transition, the sky turns an ominous purple with thunderstorms, and rocks from the land begin floating above. 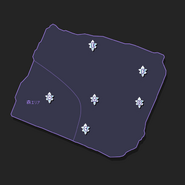 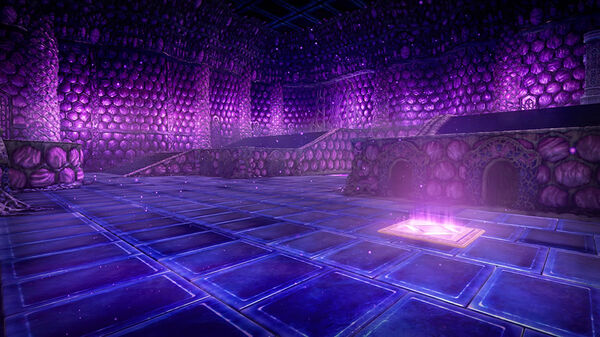 This palace is as grotesque as its netherworldly origins: the floor rises and falls as would a heaving chest, and the walls pulsate in the same manner as blood vessels.

Having appeared in past Dissidia titles, Pandaemonium is the final dungeon in Final Fantasy II, with this iteration closely resembling the seventh floor from the original game. Platforms that were floating or could not be reached in the original versions are accessible and able to be walked over, with the walls being effective for wall rushing opponents.

In the stage transition, the upper walls and ceiling break away, and large crystal spikes encircle the stage, a reference to the top floor of Pandaemonium and the final battle with the Emperor in the 16-bit ports. 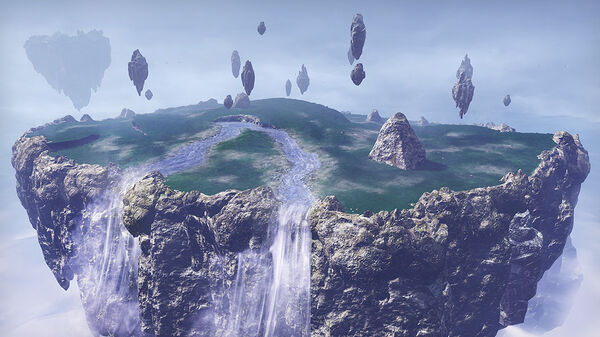 This bucolic, airborne landmass has been separated from the mainland for so long, its history has diverged entirely. Beyond its rolling hills, the Crystal Tower stands imposingly.

The Floating Continent is the first overworld the Warriors of Light explore in Final Fantasy III; the design of the stage is based off the isles as it appeared in the opening CGI movie from the Nintendo DS remake, with the battleground taking place on one of the larger isles of the continent.

In the stage transition, the light of the Crystal Tower dissipates the fog, clearing it away to reveal the bright blue sky and other isles around the continent, with the Invincible emerging from the sea of clouds, circling around the stage. 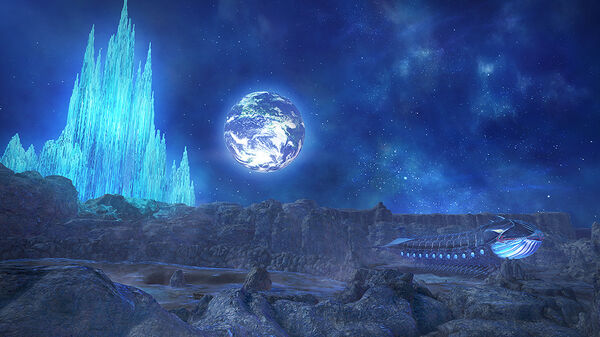 Though artificial, the Red Moon and the ravine running through it look decidedly natural - unlike the nearby Lunar Whale.

Though the Lunar Subterrane is the final dungeon from Final Fantasy IV, the battleground takes place on the surface of the Red Moon, as with the previous iteration of the stage, but with the Lunar Whale, Crystal Palace and Earth much closer in the background. In comparison to other stages, the surface of the terrain is more erratic in elevation, never the same level in specific points on the map.

During the stage transition, light emits from the top of the Crystal Palace, causing large waves of shooting stars to circle the stage, with the Earth emitting an enigmatic white glow. 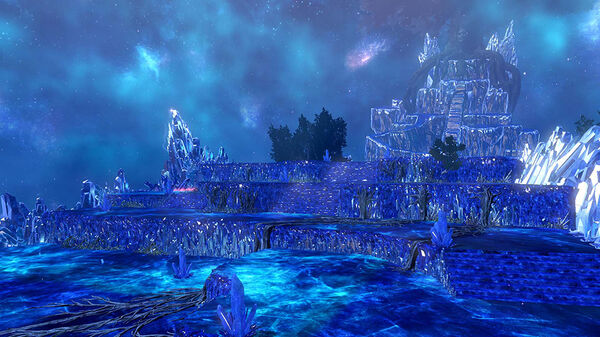 This plane of existence and the abhorrent fiends that lurk within it were sealed away generations ago.

In the stage transition, the space seen in the background changes color to orange, with the stage appearing to speed through the Rift. 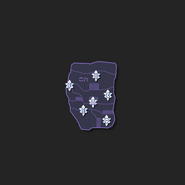 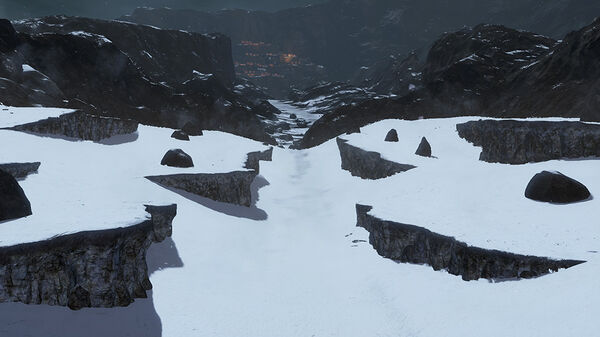 Through this vast snow-covered expanse runs a path that leads to a mine where a rime-ridden esper slumbers.

The outskirts of Narshe were featured in the opening sequence of Final Fantasy VI, and is the first location the player explores in the game. The snowfield has the distinction of being the largest arena in Dissidia NT both in elevation and size, with the town of Narshe itself featured in the distant background.

In the stage transition, the snow melts away and the sky turns an ominous red, with large flashes of light shining in the distance, alluding to the cataclysm and Kefka's use of the Light of Judgment. 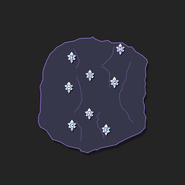 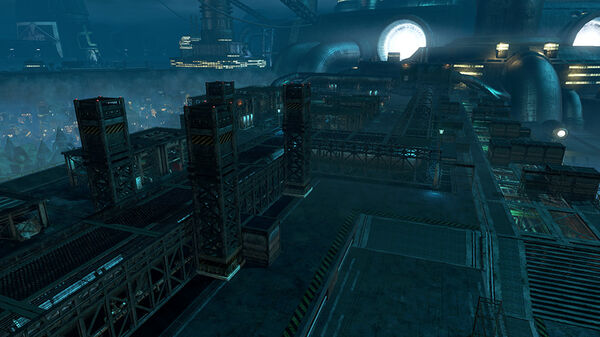 A reactor looms large over the maze of pipes that typifies this industrial powerhouse, killing the planet in the name of economic prosperity.

The dystopian city of Midgar is the first area the players explore in Final Fantasy VII. The battleground takes place in front of the Sector 5 Reactor, with Shinra HQ seen in the distant background.

During the stage transition, Meteorfall commences, with spiralling flames destroying parts of Midgar, and Meteor itself can be seen in the sky approaching the city. 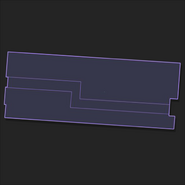 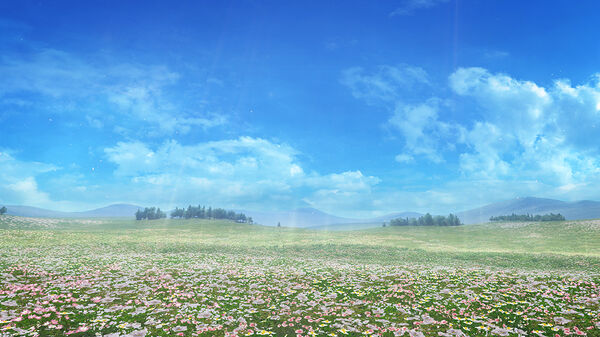 This desolate field lies within a time-compressed world. Though it may not look like much now, once a certain promise is fulfilled, the land will teem with flowers.

The Promised Meadow is where Squall and Rinoa both promised to return to should they ever be separated. It is unique in that there are no elevated obstacles or destructible environments, though the stage itself is enveloped by a protective aura, which functions as a wall, and is the smallest arena in Dissidia NT both in size and elevation. Uniquely, it mixes two different locations from Final Fantasy VIII: the Void and the flower field next to Edea's Orphanage.

During the stage transition, a surge of light eradicates the void to reveal its true form: the field of flowers which Squall and Rinoa finally return to, referencing Rinoa's use of her sorceress powers to bring her and Squall back into the real world in the game's ending. 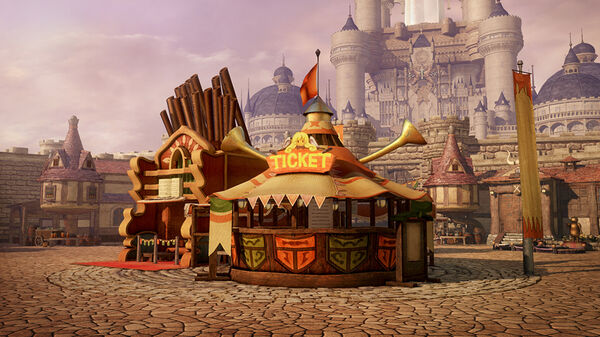 The spacious commons in this bustling castle town is the perfect place to catch a glimpse of passing theater ships.

Alexandria is the first location players can explore in Final Fantasy IX, with the arena set in the town square of the kingdom. The ticket booth in the center of the stage functions as a platform, and the castle parameters serving as the higher elevated platforms. Alexandria Castle can be seen in the background, with the Prima Vista.

During the stage transition, the sky turns to night, the town is under attack and wings emerge from the castle, revealing Alexander, referencing the Battle of Alexandria. 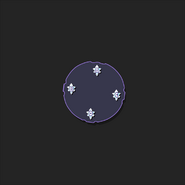 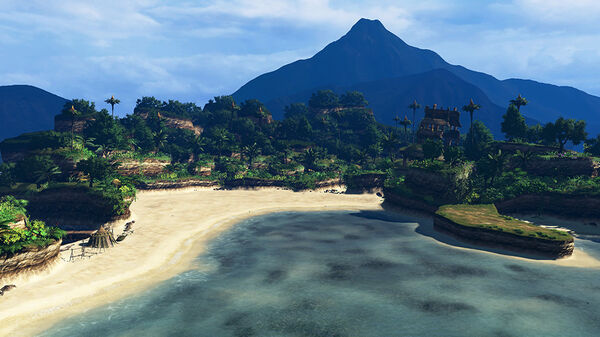 This natural wonder of an island lies at the southern extreme of Spira. Its picturesque shoals extend for a sizeable distance.

The isles of Besaid is one of the first locations explored in Spira in Final Fantasy X, with the port area serving as the battleground.

In the stage transition, the sky turns to sunset, and Pyreflies are spread throughout the stage, referencing both Yuna's Sending in Kilika, and the pyreflies recurrent presence across Spira. 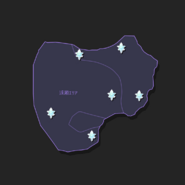 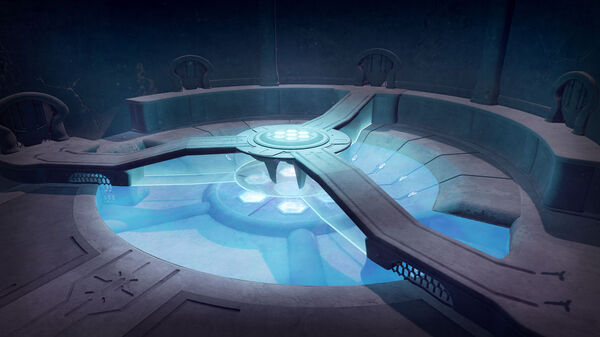 This vast hall situated at the peak of Delkfutt's Tower houses an ancient crystal though to bridge Vana'diel with eternal parardise.

Added via update on November 9, 2017, the Delkfutt Tower is a Zilart structure located in Qufim in Final Fantasy XI and used by the Zilart princes to their reach the floating city of Tu'Lia. The battleground takes place in the Stellar Fulcrum, the most important room of the tower. There are two heights in this stage with the lowest one being divided in three thanks to the walls made of raw energy.

In the stage transition, the tower crumbles and its walls get destroyed revealing the dark skies that cover Qufim while a beam of light emerges from the center of the stage, it references the moment Kam'lanaut activated the core at the center of it to focus the energy of the mothercrystals to the Celestial Nexus at the bottom of Tu'Lia. 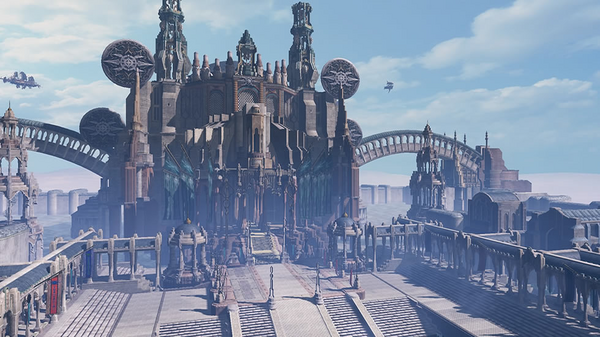 This wide, stone street in Old Dalmasca's capital terminates in steps leading to a resplendant cathedral.

Added via update on December 15, 2016, Rabanastre is the first location players can explore in Final Fantasy XII, with the battleground taking place outside the cathedral in several FMVs and cutscenes in-game. Several airships are seen flying throughout the skies of the stage.

In the stage transition, the Battle above Rabanastre commences, with the battle between the Resistance and Archadian Imperial Fleets engulf the sky. Various airships, including the Sky Fortress Bahamut take prominence in the background. 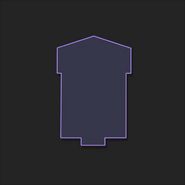 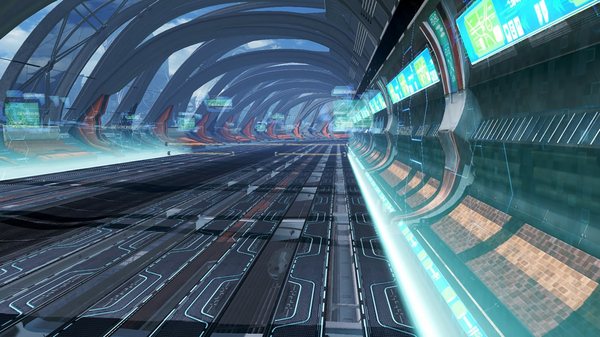 The broad thoroughfare upon which you fight suggests an opulence befitting Cocoon's floating capital.

One of six available stages at launch, Eden is one of the last locations players explore in Final Fantasy XIII, with the Expressway area serving as the battleground. The original version of the stage was an exact replica of its original appearance, though this created gameplay problems, and as a result was removed on March 17, 2016 and later re-added through updates on October 20, 2016.

In the stage transition, the stage slowly tears apart and soul fragments engulf the stage, referencing the Siege of Eden and the destruction of Cocoon, and Vanille and Fang's transformation into Ragnarok at end of Final Fantasy XIII. 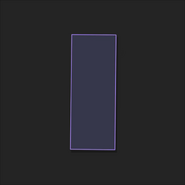 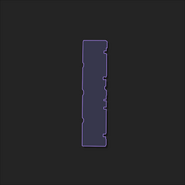 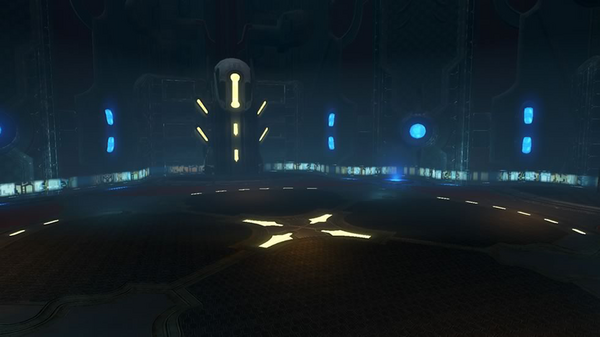 The Praetorium lift upon which you duel here exudes a cold, lifeless aura that gives even stalwart veterans pause.

Added via update on August 11, 2016, Porta Decumana is the location of the final battle in the storyline of A Realm Reborn, with the battleground taking place in the elevator where Ultima Weapon is fought.

In the stage transition, the elevator is surrounded by fire and debris, referencing Lahabrea's use of the weapon. 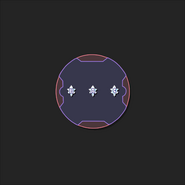 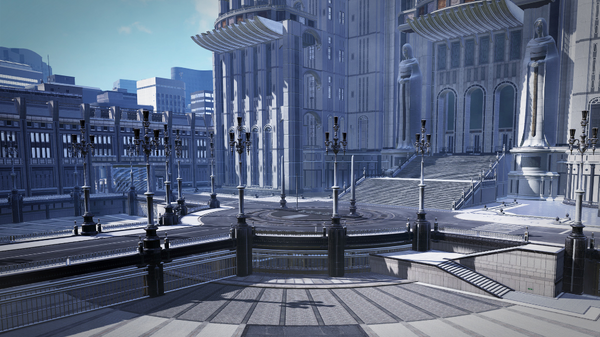 Centered around a majestic high-rise known as the Citadel, this modern city is the capital of Lucis, a prosperous kingdom protected by a magical wall.

Added via update on August 10, 2018 on the Arcade and in October 18, 2018 on the console version, Insomnia is the location of both the start and ending of Noctis's adventure in Final Fantasy XV, with the battleground taking place in the entrance courtyard of the palace, where Ifrit and Ardyn Izunia are fought as bosses.

In the stage transition, the day turns into night, reflecting the downfall of Insomnia and the state of Eos because of the Starscourge at the end of the game. The Kings of Lucis appear in the background. 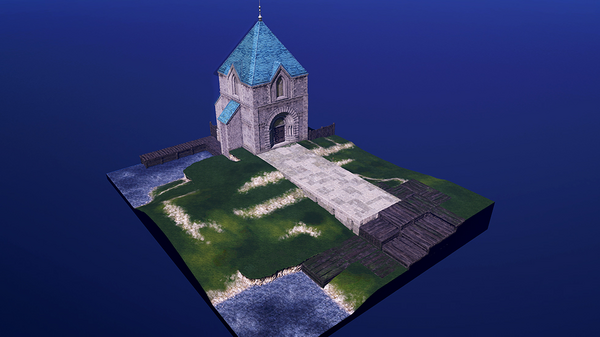 This ancient monastery, whose construction dates back more than twelve centuries, houses the realm's storied history within its vast subterranean archives.

Added via update on February 22, 2018 on the Arcade and on March 22, 2018 on the console version, the stage is a perfect recreation of the original battle map, complete with updated graphics and atmospheric details, including a visible sky.

In the stage transition, the sky becomes cloudy and dark, plagued with thunderstorms, with rain showering the battlefield, referencing the first chapter of the game. 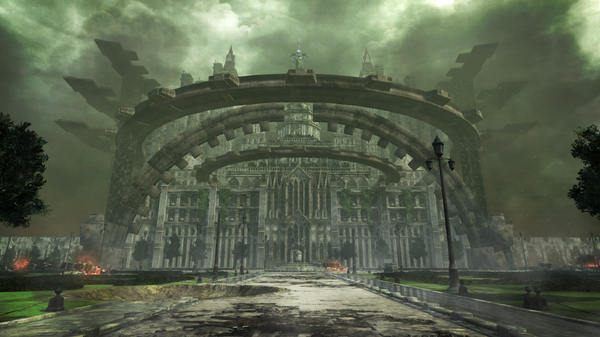 A plaza leading from the main gate to the entrance of Akademeia, wherein lies the Vermilion Bird Crystal, capable of granting people power of magic.

Added via update on June 14, 2018 on the Arcade and on August 16, 2018 on the console version, the stage is a perfect recreation of Akademeia's courtyard during the attack of the Milites Empire, complete with updated graphics and atmospheric details.

In the stage transition, the sky becomes red and foggy, referencing Tempus Finis. 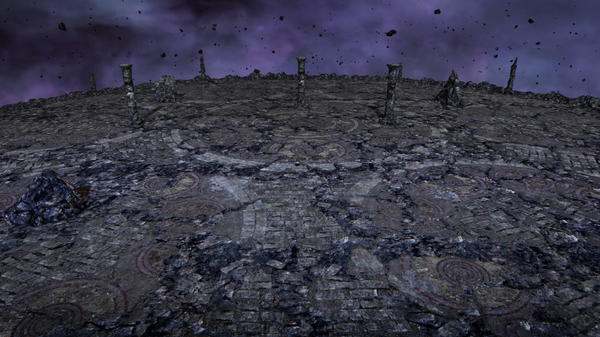 Created by the two gods who govern this world, this isolated space is the arena for the clash against their True Enemy

Added via update on November 15, 2018 on the Arcade and on December, 2018 on the console version, the stage is set on the battlefield where Shinryu could be fought.

In the stage transition, the sky becomes purple, the numbers of boulders floating multiply and the ground starts glowing red.

Eden was removed and modified because of a drawback exploited by Assassin type characters who could corner slower opponents in the sides of the stage and defeat them quickly.

The Crystal Tower, the Prima Vista and the Sky Fortress Bahamut were stages in Dissidia 012 Final Fantasy, and in the arcade version they appear as cameos in their respective series stages.