In Dissidia 012 Final Fantasy, there are special skills the player may activate while moving on the board. The player can carry five skills at a time, and acquire new skills from shops or treasure chests, or by collecting orbs containing powers of the dead. Skills are single use abilities. 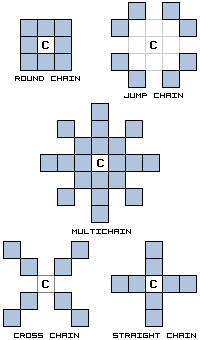 When a Chain skill is used, enemies are fought in ascending order of difficulty (Normal, Hard, Strange, Expert, Ultimate, Party).

Attack Skills affect all enemies when used in a Chain.

Charge skills remain active for all battles in a chain.