Dischord is an enemy ability used by several enemies, including Gilgamesh, Enkidu, and Druid. It halves the target's level. The player may utilize Dischord by catching and releasing a Tunneller.

Unleashes sound waves of a special frequency that halve an enemy's level.

Dischord is a Lore spell that halves the target enemy's level, and costs 68 MP to cast. When facing an enemy with an odd level, Dischord will round up. It has a 100% hit rate, but will miss against those immune to Death. It can be learned from Chaser, Crawler, Dark Force, Figaro Lizard, Gamma, Lizard, Metal Hitman, and Satellite.

Level is the single most influential statistic which affects the damage for nearly everything. It is an important part in the calculation of damage, whether it be physical or magical. Dischord will halve the target's level for the remainder of the battle. Since the user's level affects nearly all attack damage and many success rates, this ability has more of an impact than it may look like at first glance. Dischord also helps with improving the success rate for both Steal and Mug, which compares Locke/Gogo's level to the target's.

The formula for Dischord is:

Eerie Sound Wave is an enemy ability used by Deathgaze and Evil Eye. It inflicts 5 hits of moderate AP damage to Zack.

Eerie Sound Wave is an enemy ability used by the Malboro, and it inflicts non-elemental damage to the party.

Eerie Soundwave is an enemy ability that deals non-elemental damage to anyone within its range and has a chance inflict Confuse. It is used by Vampyr, Seeker, Worgen, Alpha Worgen, Antares, Cerberus, Deadly Nightshade, Brainpan, Bloodwing, Enkidu [a], Anubys, Lindbur Wolf, Phyllo, and Mastiff [b, c].

Dischord is used by Squidraken. It has 100% hit rate and dispels Float, Reraise, Invisible, Regen, Protect, Shell, Haste, Faith, and Reflect. It targets all creatures within three squares of the user, including the user. See also enemy abilities.

Soundwave is an enemy ability used by Big Malboro. It removes Auto-Life, Regen, Shell, Protect, and Conceal to all targets within a range of 3.

Eerie Sound Wave is a Blue Magick spell that removes all buffs from the target, and it can be learned from most monsters of the Malboro species. It costs 8 MP, and has a range of 4.

This section about an ability in Dissidia 012 Final Fantasy is empty or needs to be expanded. You can help the Final Fantasy Wiki by expanding it. 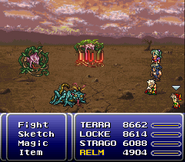 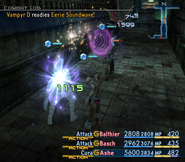 This gallery is incomplete and requires Final Fantasy Dimensions II added. You can help the Final Fantasy Wiki by uploading images.

Dischord is the combination of "dis-" and "chord".

Dis- is a prefix for "reversal" or "removal".

A chord, in music, is any harmonic set of pitches consisting of two or more (usually three or more) notes (also called "pitches") that are heard as if sounding simultaneously.