Disable, also known as Don't Act (ドンアクト (or ドンアク), Don Akuto (Don Aku as a spell)?), is a recurring status effect, exclusive to games set in Ivalice. This status prevents the affected character from performing any action, meaning they can only move.

The character is unable to act. Remove with a Remedy.

Disabled units cannot take action, but can still move. It is caused by the Time Magick spell of the same name and by Sledgehammer and Orochi weapons, and the Stone Bolts.

Disable can be healed with Esuna, Esunaga, and a Remedy once Remedy Lore 1 has been accessed. Black Belt and Ribbon immunize against it.

Disable renders a unit unable to take any action. It is healed by Penelo's Esunaga or Fran's Ward of the Wood. The player can inflict the status on opponents with Penelo's Hypnotic Dance, Balthier's Maim or Bahamut's Mega Flare.

The player can immunize a team against Disable with Ashe's Ribbon or by summoning Fire-elemental Espers, which have a natural resistance to it.

Disabled reduces the potency of the afflicted's actions. It was inflicted by the

Disable, which is no longer available to players.

Disable (Don't Act in the original version) makes a unit unable to act, evade, or use reaction abilities, including Blade Grasp and Abandon. At the end of an AT, a unit with Don't Act will have his CT decremented as if he had acted. It can be cured by Choco Esuna, Esuna, Remedy, Purification and Dragon's Gift. Disable lasts for 24 ticks.

Disable is caused by the Mystic's spell, Hesitation, as well as the Templar's Spellblade ability of the same name. The Arm Shot ability of the unique classes Machinist and Sky Pirate inflicts the status as well, whose hit-rate is dependent on the user's Speed stat. Orran can also inflict Disable with his Celestial Stasis ability.

Disable lasts until after the afflicted unit has taken three turns. It can be inflicted by an Archer's Aim: Arm, an Elementalist's Fire Whip, and a Juggler's Dagger. Cid can also Disable with the Bind A-ability in his job, Judgemaster.

Prevents all actions apart from movement. 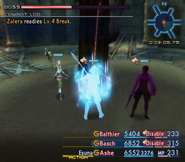