Cid Pollendina: Oh, shut up and help me remodel the Dirt page!
Please expand this article into a full one. The following tasks need to be completed:This request can be discussed on the associated discussion page. Remove this notice upon completion.

Dirt (ダート, Dāto?), also called Soil and natural surface is a recurring terrain featured in areas of the world map in the Final Fantasy series. It usually appears where there is a lack of grass.

There are patches of dirt scattered throughout the Underworld, and it serves as places where the airship cannot land.

Dirt areas return in the sequel to Final Fantasy IV, only appearing during the portion of Rydia's Tale in the Underworld. It serves the same purpose as the previous game.

Dirt appears as a terrain in Final Fantasy VII. Dirt usually appears as a layer above grass terrain, as an alternative to grass. All major areas of the World Map except the Grasslands Area, the Icicle Area, the Gongaga Area, and the Rocket Launch Pad Area, feature dirt in portions. The Highwind cannot land on dirt, however, the Buggy can park on it. Enemies fought on the dirt terrain often match the enemies fought on the grass with few exclusives. Midgar is surrounded by dirt due to the mako reactors killing the surrounding countryside. No islands use dirt terrain.

In the Midgar Area, the only place the Custom Sweeper enemies can be fought is on the dirt terrain, which is the only place they can be fought other than the Battle Square in the fifth battle, albeit only preceding the party obtaining the Tiny Bronco. In the Junon Area, the dirt terrain exclusively contains the Hell Rider VR2 enemy, which otherwise can only be fought in the eighth battle of the Battle Square preceding the appearance of the Tiny Bronco. The Zemzelett enemy, although appearing on other terrains, is more likely to appear on the dirt than in other terrains.

The Cosmo Area features dirt heavily. Due to this, a distance must be traveled after the player departs from the Highwind in the Cosmo Area before they can reach Cosmo Canyon. The first time, the Buggy can take the player to Cosmo Canyon, however this does not avoid Random encounters. Contrary to its name, the Desert Sahagin enemy is fought in the dirt and canyon areas. Additionally, the Griffin, Bagrisk, Golem, and Skeeskee enemies are fought here.

The Wutai Area also heavily features dirt aside from small areas of grass and its beaches. The dirt in the Wutai Area is exclusive to the Thunderbird and Bizarre Bug enemies. Like on the grass terrain of the same area, the Tail Vault enemy dominates its formations.

The Tonadu enemy is fought in the dirt of the Woodlands Area, however, it is also more prominently fought in the beaches, with the Under Lizard enemies appearing more often on the terrain despite also having a small chance of appearing in the grass area. Palette-swap of the Griffin, the Hippogriff enemy has the highest chance of occurring in the dirt areas of the Mideel Area. The Spiral enemy dominates the dirt terrain, while also having a small chance of appearing on the grass.

There's a terrain tile called Soil, known as Natural Surface in PlayStation version. A Geomancer standing on the Soil terrain tile will use Sinkhole to deal Non-elemental damage with a chance of inflicting Immobilize to any enemy units within five squares.

The entire Fire Region is covered in dirt and rocks, there's not even a single speck of grass or trees to be found. This is probably due to the area having an active volcano. 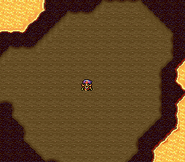 Dirt on the Underworld map in Final Fantasy IV (SNES).

Dirt on the Underworld map in Final Fantasy IV (GBA).

Dirt or soil is the mixture of minerals, organic matter, gases, liquids and a myriad of micro- and macro- organisms that can support plant life.

This section is empty or needs to be expanded. You can help the Final Fantasy Wiki by expanding it.
Locations
Community content is available under CC-BY-SA unless otherwise noted.
Advertisement