Edit
Please note that the following article deals with the coverage of a fan-made product that isn't licensed by Square Enix.

Late 2004 to early 2005 Square held a competition to see who would make the best fanart following the theme "FFanything-2". The winner would get their design turned into a pixel rendition. The winner was Dion Rogers aka MUNCH, a video game designer. His submission was a conceptual design for Rinoa Heartilly of Final Fantasy VIII, if she was to appear in Kingdom Hearts II.[citation needed]

The design became relatively popular among cosplayers, many opting to use the Dion Rogers Rinoa design as their Rinoa cosplay instead of the character's actual in-game design. The art had been dubbed[By whom?] "The drawing which launched a thousand cosplays", which echoed the description of the Trojan War's Helen of Troy who had "The face that launched a thousand ships". 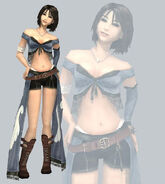 Walking with a gun-blade, with background.

Looking back, with background. 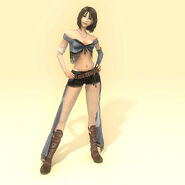 Walking with a gun-blade, no background.

Collage of front, back and side view, plus 3ds Max 4.