I'm the owner of Gold Saucer. The name's Dio.

Dio is a non-player character from Final Fantasy VII. He is the owner of the Gold Saucer, and addresses Cloud as "boy" or "young man".

Dio is a muscular man who styles himself like a wrestler, showing off his fitness by not wearing much else than shorts. He has short dark hair and a mustache.

Dio loves showmanship and presumably makes use of this personality trait to become a wealthy business man as the owner of Gold Saucer. He likes to personally visit the premises and has a giant golden statue of himself displayed at the park. He portrays himself as a celebrity, his autographs being given as rewards at the Battle Square special battles.

Dio is a man of honor. When he mistakenly accuses and exiles Cloud and his group into Corel Prison, upon realizing his mistake he brings them a buggy as recompense and relays what he knows of Sephiroth traveling through the area, suspecting Cloud wants to know. Later on he lets Cloud have the Keystone since he was "good to him in the past" under the condition Cloud fights one round in Gold Saucer Battle Square. The Battle Square may be Dio's favorite attraction at the park, as his personal collection of exotica is on display there.

When visits the Gold Saucer looking for clues for Sephiroth's whereabouts, they can meet Dio outside the Speed Square. He asks Cloud about the Black Materia, the first time the party hears about it. Dio explains that a "boy about Cloud's age" asked him if he had it, but Dio had no idea what he meant. The boy who had asked him had a black cape and a tattoo #1. Dio tells Cloud to stop by his collection at the Battle Square before making his leave.

After recruiting Cait Sith, the party heads to the Battle Square to find its employees slaughtered. Dio enters the scene with security guards and blames the massacre on Cloud's group, who are sent down to the Corel Prison. The party finds the true culprit and returns to Gold Saucer where Dio congratulates Cloud via letter for having won a chocobo race. He gives the party a buggy as an apology for throwing them into the prison as innocents. In a post script Dio mentions of having met Sephiroth and suggests Cloud try and get his autograph, as this Sephiroth person seems very popular among "boys of your age".

Dio has a museum of collector's items near the Battle Square, one of which is the Keystone he had purchased from the Weapon Seller down the coast. After the events in Rocket Town the party go looking for the Keystone, but Dio is reluctant to give it to Cloud. Dio agrees to yield it if Cloud fights a round in the Battle Arena. If Cloud wins all eight rounds, Dio is impressed and will reward him with items, but will yield the Keystone no matter how well Cloud performs.

After obtaining the Ultima Weapon as well as the top prizes from the Battle Square, Cloud can enter special battles at the arena. Some of the random rewards earned from completing the special battles more than once are Dio's autograph and Dio's diary key items, but these items have no function in the game. In the International version the player has a bonus disc that shows close-up images of all items, where the player can view these key items.

Crisis Core -Final Fantasy VII- has a shop called Network Shop Duo, based in the Gold Saucer and owned by "Lord Duo".

One of the business signs in Insomnia in Final Fantasy XV is "Dio", alluding to the character. 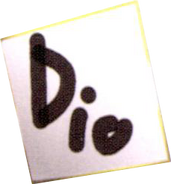 Golden statue at the peak of the Gold Saucer.