There're huge dinosaurs in the forest north of the Veldt. They're incredibly strong.

Thief inside the Cave on the Veldt

Dinosaur forest is a term used to describe a location in Final Fantasy VI. It is a forest located north of the Veldt in the World of Ruin, and is roughly in the shape of a dinosaur's head. The forest is known for being the home of the Tyrannosaur and Brachiosaur, two powerful monsters among the most dangerous normal enemies in the game. However, they leave large amounts of experience, making the dinosaur forest a good place for level grinding.

Brachiosaurs also have Ribbons to steal and can drop Celestriads, two of the best relics. The two enemies are very powerful and can easily kill the party if the player is unprepared. The enemies on the plains outside the forest also leave a lot of Experience Points and are easier to kill if the player is having trouble with the Tyrannosaurs.

In the Super NES version of Final Fantasy VI one of the thieves in the Cave on the Veldt mentions the Dinosaur forest to the party and "a fearsome dragon" that lives there, implying a specific enemy that can be sought out there. This led to rumors about a boss that could be encountered if the player defeated enough enemies within the forest, and defeating this dragon boss would reward an item to revive General Leo and have him permanently join the party. No such boss or item exists, and in the GBA version the line is re-translated to refer to "huge dinosaurs" rather than a specific enemy, which is also what the original Japanese script says. 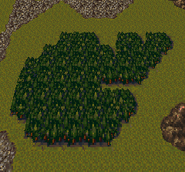