A bright, cheerful girl born and raised in Lux, Diana has always been praised by her elders for having a level head. Perhaps in part due to this, she tends to treat Sol like a young child despite their similar age. As the curtain raises on our story, Diana is waiting with bated breath for the return of her older brother, Aigis, who has been sent on an expedition to a far away land.

Diana is a playable character in Final Fantasy Dimensions. She is a childhood friend of Sol, and the sister of Aigis, made into one of the Warriors of Darkness by the Crystal of Lux.

Diana has short, pale blue hair and eyes. She wears earrings. She wears a baggy white jumpsuit with draping sleeves that bare her shoulders under a silver breastplate to which a baby blue cloak is attached. A dark blue belt around her waist is attached to a duster that falls to her calves, and she wears blue and brown boots. The dominant color in her various job outfits is light blue.

Diana is a levelheaded young lady who puts up with Sol's thickheadedness. Among the trio of friends, she has the most common sense and doesn't hesitate to speak her mind when troubled. Even though she and Sol are the same age, she is more mature, and tends to treat him akin to a younger brother.

A cheerful young woman. Has a loving older brother. Treats Sol like a kid.

While traveling across the forest to the Checkpoint to welcome back her brother Aigis, Diana sees Sol and Glaive sparring. After the fight, Diana joins the two and states to a clueless Sol why she and Glaive are in the woods like he was. Upon reaching Lux, her brother is called to Castle Lux. Diana takes offense to Sol's choice of words about her brother being drafted by Avalon and slaps him before running to her house. Though still angry even after Sol apologizes, Diana resolves to infiltrate Castle Lux to find the reason Aigis was being called.

The three eavesdrop but are caught, and they, along with Aigis, are sent to the Crystal Temple to investigate. Diana journeys with them to the Northern Cave and the temple, and along with the party, is defeated by the Watchbeast. After the explosion Diana wakes up, finding herself with Glaive, but separated from Aigis and Sol.

Diana begins with access to the Level 1 White Magic spells Cure, Libra, and Poisona, to take care of identifying enemies and basic healing. Diana has high magical stats, Mind being her highest stat, which can benefit the White Mage job. Her stats can also benefit the Ranger and Dancer jobs, but since the stat differences between characters are minimal, and abilities and equipment are of greater importance, she can competently do any job. Jobs also gain stat boosts when they level up, which helps even out stats. 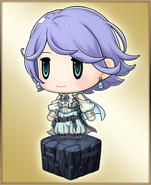 Diana appears on a card.

Diana is the name of the Roman goddess of the moon.