Diamond Weapon is a boss in Final Fantasy VII. It is one of the Planet's many Weapons. The party fights it as it approaches Midgar towards the end of the game. Its attacks include a foot stomp, a blast of magical energy, and its Diamond Flash, a Gravity-based attack with a three-turn countdown that also inflicts Silence.

If the player attempts to fight Diamond Weapon by ramming it with the Highwind, Cid will yell at Cloud for trying to break the airship and demand they fight it on the ground, and the Highwind will be pushed back. Because Diamond weapon appears in shallow water, the player cannot use the submarine to block it and the Tiny Bronco is no longer accessible at this point.

Diamond Weapon's laser ray deals 700+ damage to one target. Its foot stomp deals 1000+ damage, and it will use it on the party member with the highest current HP.

Diamond Weapon is immune to physical attacks until it opens up its armor if hit with a certain number of summons or Limit Breaks. At this point, it will use Countdown. Unless killed in three rounds, it will use the Diamond Flash to hit all party members for 7/8 of their current HP and inflict the Silence status, reverting its immunity to physical attacks. During the countdown it is immune to magical attacks and only uses its laser ray. Once its HP drops below 50%, the party will need to use three Limit Breaks/summons to trigger the countdown again. Diamond Weapon never starts the countdown if no summons or Limit Breaks are used.

The party can steal the Rising Sun for Yuffie; this is the only way to get it.

When Diamond Weapon is defeated, it does not turn red and phase out like most enemies; the camera simply zooms in on its head and cuts to the Battle Results screen. This is because the party doesn't actually slay the Weapon, rather, they only hold it off until the Sister Ray destroys it.

Good spells to use outside of the countdown phase are Bolt3, Trine, Magic Breath, and Ultima. After being hit by two or three Limit Breaks, the Weapon may open up its armor allowing the party to use physical attacks. It then starts a countdown from 3, during which it is immune to magical attacks.

Diamond Flash can be annoying, as the player needs magic to continue attacking. Thus, it is advised to not use Limit Breaks; or, alternatively, bring immunity to Silence. Since Diamond Flash charges Limit Breaks, the party can simply use three Limit Breaks in quick succession to restart the countdown; if the party members have Fire-elemental armor or the Elemental-Fire/Ifrit Materia combo in their armor, the player cannot get a Game Over.

Diamond Weapon's IdleAnim = Normal Stance
Choose Self
Use <> on Target

Final Fantasy VII Remake has a side-quest called "Corneo's Secret Stash", where Cloud and his party are tasked with finding Don Corneo treasury. One of them is the "Diamond Tiara" ( 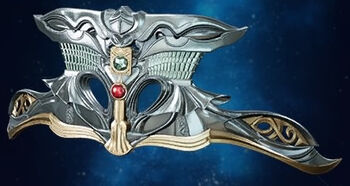 ), which is shaped after the Diamond Weapon.