Diabolos is an esper in the Advance and the now discontinued mobile/Steam releases of Final Fantasy VI who can be acquired as a magicite.

Diabolos is a humanoid, devilish creature. Its skin is mostly black and red, with large red wings and a long, black tail.

Diabolos was one of several espers the Gestahlian Empire captured during their first raid on the esper world. The captive espers were taken to the Magitek Research Facility at Vector, and for sixteen years they were experimented on and had their magic drained to develop the Empire's Magitek army.

Shortly before the Returners infiltrated the facility and shut it down, Diabolos, along with three other espers, escaped. Through unknown circumstances, Diabolos turned into magicite and ended up in Dragons' Den, where it was guarded by Kaiser Dragon. The Returners explored Dragons' Den and defeated Kaiser, taking Diabolos's magicite.

Diabolos costs 100 MP to summon and casts Dark Messenger, which reduces all opponents' HP to 1/16. It ignores immunity to Instant Death and inflicts Sap. At level up, Diabolos provides a +100% boost to HP.

Diabolos is largely useless as a magicite—by the time the player obtains it, they have defeated the most powerful boss and it is likely that every party member can inflict massive damage to all enemies every turn on their own. Its level up bonus is not very impressive, as the party members are likely at a high level already with several thousand HP, and a few extra hundred points with Diabolos would not make much of a difference.

However, Diabolos is useful in a low level challenge, because fractional damage does not depend on the player's level, and Dark Messenger ignores instant death immunity.

As with Diabolos itself, the spells it teaches are not very useful outside of a low level challenge. An Ultima spell, which all characters can easily have learned by the time they acquire Diabolos, will do just as much or more damage than either gravity spell at any reasonable level. 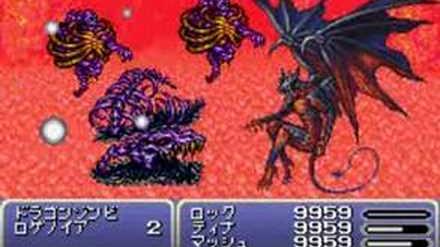 [view · edit · purge]Diabolos is the Greek word for "devil". It has entered many languages to mean devil, such as Diabolus (Latin), Diavolo (Italian), Diablo (Spanish), Diable (French), and Diabo (Portuguese). Diabolos actually means "accuser" or "slanderer" and could also be connected to the Greek word diabolous, which means "divider" (which befits Diabolos's affinity with the gravity element in the Final Fantasy series), but eventually the general word Diabolos became the specific name of the entity. In the original Greek rendering, it was used to refer to the Christian Devil (The New Testament was written in Greek). Devil is the English translation of Diabolos and in Christian belief, this being is the embodiment of evil.

The concept of the Devil is believed to originate in Zoroastrianism with Angra Mainyu (also known as Ahriman) as well as from the Judaic Satan in the Book of Job in the Old Testament. Their Satan was merely the "devil's advocate", an angel who acted as a skeptic and whom God allowed to afflict Job with suffering. Satan is Hebrew for "prosecutor/accuser" or "adversary".

The concept of the summon Diabolos in Final Fantasy may be connected to the Jinn in Islamic mythology, similar to Ifrit. The djinn were the origins of genie myths and were spirits or ghosts made of fire or smoke. They were said to grant wishes.