Who dares disturb my sleep?

Diablos is an optional boss who becomes a Guardian Force upon defeat in Final Fantasy VIII. Diablos is the fifth available Guardian Force, but listed as the sixth GF in the menu. It is a demonic Gravity-based Guardian Force who deals fractional damage to opponents depending on its level.

Diablos learns HP-J, Mag-J and Hit-J junctions, being among the few GFs to learn the latter. It learns HP and Magic boosting support abilities and Mug, which lets one steal items from opponents with the Attack command. Its unique abilities reduce the frequency of random encounters and refine time/space and status magic from items. Because Diablos's attack power is determined differently from most GFs', it doesn't learn SumMag+ abilities or Boost.

Diablos is a red-and-black Guardian Force that resembles depictions of the devil. It has bat wings and a long devil's tail. It is muscular, and has horns and claws. It always hovers using its wings for flight.

Diablos resides within the Magical Lamp, an item received from Headmaster Cid when the party first sets upon their mission for Timber. Upon using the lamp in the menu the screen will dissolve and the player will fight Diablos. Should the player lose, the game ends in a Game Over; the item's description advises the player to save their game before using the lamp. It is advisable to defeat Diablos just after receiving the lamp. If careless, the player can lose the chance to obtain the Diablos GF by selling the Magical Lamp, or by missing the scene where Cid gives the Magical Lamp to Squall in the first place (possible if the player heads back to the Garden rather than toward the gate after the mission briefing without talking to Cid).

Obtaining Diablos in the Steam version earns the player the achievement Diablos.

Diablos's summon attack is Dark Messenger that deals damage in relation to the enemies' maximum HP via a percentage equal to Diablos's level range {e.g. 10-19, 30-39} (with a set damage limit at 9,999).

Diablos can kill the opponent in contrast with other Gravity-based attacks, meaning, at level 100, it will kill any foe with 9,999 HP or less. If Diablos is below level 10, its attack will deal 9% of enemies' maximum health in damage. Diablos is especially useful against enemies with high defense, such as Tonberries and Adamantoises.

Dark Messenger won't work on most bosses, as most are immune to Gravity. Because Diablos's damage is calculated differently from all other Guardian Forces' he cannot be boosted, and though he can learn SumMag+% abilities via items, they have no effect on his attack power.

Abilities learned naturally by Diablos are listed below:

Diablos's ST Mag-RF skill is an integral part of the more casual of low level challenges, as it is the earliest possible source of the Break magic that allows GFs to gain AP while keeping characters low level.

Diablos is an optional boss summoned into battle by using the Magical Lamp. Upon using the lamp in the inventory, the current party is transported to an alternate dimension where Diablos is fought. Diablos can be fought with either Squall's or Laguna's party, as the Magical Lamp may be used at any point in the game. Though Diablos is a Gravity-based enemy, he himself is vulnerable to Gravity. It mainly attacks with Gravity-based attacks, and while they do a high damage, they cannot kill the party. If the party fights Diablos when it is LV30+, they can draw good magic from it.

Diablos is a Level 9 GF Card in Triple Triad card used for playing the minigame and for turning into 100 Black Holes. It drops from Diablos when it is fought as a boss inside the magic lamp. 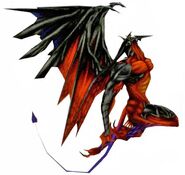 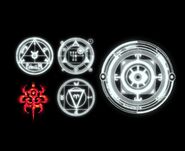 [view · edit · purge]Diabolos is the Greek word for "devil". It has entered many languages to mean devil, such as Diabolus (Latin), Diavolo (Italian), Diablo (Spanish), Diable (French), and Diabo (Portuguese). Diabolos actually means "accuser" or "slanderer" and could also be connected to the Greek word diabolous, which means "divider" (which fits given Diabolos's affinity with gravity element in the Final Fantasy series), but eventually the general word Diabolos became the specific name of the entity. In the original Greek rendering, it was used to refer to the Christian Devil (The New Testament was written in Greek). Devil is the English translation of Diabolos and in Christian belief, this being is the embodiment of evil.

The concept of the Devil is believed to originate in Zoroastrianism with Angra Mainyu (also known as Ahriman) as well as from the Judaic Satan in the Book of Job in the Old Testament. Their Satan was merely the "devil's advocate", an angel who acted as a skeptic and whom God allowed to afflict Job with suffering. Satan is Hebrew for "prosecutor/accuser" or "adversary".

The concept of the summon Diabolos in Final Fantasy may be connected to the Jinn in Islamic mythology, similar to Ifrit. The djinn were the origins of genie myths and were spirits or ghosts made of fire or smoke. They were said to grant wishes.