The Devout (導師 or 導士, Dōshi?, lit. High Priest), also known as Seer, is a recurring job class in the Final Fantasy series. They are generally an upgrade to White Mages. The Devout has effectively replaced the White Wizard job that appeared in the original Final Fantasy.

The Devout's equipment includes staves and rods. Their armor, like most mages, is limited to lightweight vests and mage robes.

Devouts tend to dress in white robes with a red or pink coat underneath. They tend to lean towards lighter armor, generally robes. Male Seers generally do not wear hoods. The most characteristic thing that differs them from White Mages is their trademark Cat-Ear Hood.

Devouts have more access and proficiency with higher-rank White Magic than White Mages, and are more able spellcasters in general.

The Devout is a job gained from the Earth Crystal. Devouts can cast all White Magic spells. They also possess higher MP for high-level White Magic. Devout is considered to be a powered-up version of the White Mage job.

The Devout serves as the counterpart of the White Mage job on The First, and serves as the job of Lamitt. When on The Source, Lamitt goes under the title of the "Devout of Darkness".

Players have the chance to use the job when Lamitt is playable in a battle instance during the healer role questline in Shadowbringers.

The Seer job is unlocked through mastery of four White Mage abilities and finishing "The Cat's Meow" quest. Equipping Tomes, its abilities include mid-rank Black and White Magick. They also boast the highest scores in MP and resistance for the hume race.

The Seer job is obtained in the Tome of Twilight chapter, and is exclusive to Warriors of Light. Unique feature to them in the series, is that Seers can raise elemental defense of the party.

The Devout is a job available after obtaining a level fifteen White Mage and a level fifteen Scholar. The preferred weapons for the job are rods and staves. The job specializes in both intelligence and agility abilities.

Only those most learned in the ways of white magic dare don the cat-eared robe.

The Devout is a character available to the party, and uses the Holy ability during battle. Unlocks at level 50.

An expert mage who uses healing magic to aid her allies. The Devout wields powerful white magic with ease, and though she has little in the way of offensive might, her skills can easily shape the course of battle.

Devout is a playable character who can be recruited as the First Time Reward for completing Fifth Ark, Part 3 on the Classic difficulty in the FF XIII track of Core Dungeons.

Krile's White Mage costume is based on the Devout job's appearance from Final Fantasy III, donning a cat-ear hooded robe.

The White Mage eidolon's final artwork depicts her as a Devout, donning the traditional Cat-Ear Hood robe of the job, and White Magic emerging from her staff.

In the original free-to-play versions, Aemo received an alternate costume based on the Devout job from the "Phantom Beast Great Decisive Battle!" event. The Devout costume was based on Krile's white mage outfit from Final Fantasy V. The costume could only be seen when Aemo was equipped with the "Devout Equipment" accessory. 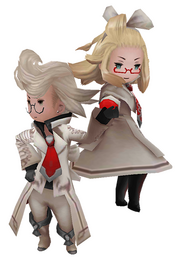 The Spiritmaster (導師, Dōshi?, lit. High Priest) is a recurring job class in the Bravely series. Like its Final Fantasy original, it is almost always a late game job that functions as a parallel to the recurring White Mage job. The major recurring characteristic of the job is the usage of familiars to aid the party in a variety of ways. Depending on the game, these effects vary by either healing the party or providing elemental boons. 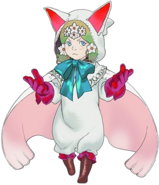 Sophia from Final Fantasy Dimensions is a Seer.

While having no direct translation into English, the job's Japanese name of (導師, Dōshi?) has various meanings, often including officiating priests or high priests commonly found in the Buddhist faith.

[view · edit · purge]A seer may refer to a clairvoyant, prophet, oracle, or diviner.

In the original fan-translations of the Famicom version of Final Fantasy III, the Devout was known as the "Shaman". [view · edit · purge]Shamanism is a practice where a practitioner reaches altered states of consciousness to interact with the spirit world to channel transcendental energies. A shaman is a person regarded as having access to, and influence in, the world of spirits who typically enters a trance and practices divination and healing.