The Devil Ride is an enemy from Final Fantasy VII. It is encountered on the world map in the Midgar Area, and in the fifth round of the Battle Square before the player obtains the Tiny Bronco. When fought in the Battle Square its stats are enhanced with double the normal HP and its Attack and Magic Attack are increased by 25%.

Devil Ride can use Drift Turn to attack the party, but the damage is low and its normal attack is weak. Valuable Hi-Potions can be stolen from it, a luxury at the point in the game it is fought.

Choose All Opponents
Use Drift Turn on Target 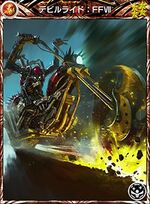 [view · edit · purge]The Devil is believed in many religions, myths and cultures to be a supernatural entity that is the personification of evil and the enemy of God and humankind.

Retrieved from "https://finalfantasy.fandom.com/wiki/Devil_Ride?oldid=3238801"
Community content is available under CC-BY-SA unless otherwise noted.