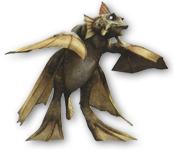 Desert Sahagin (デザートサハギン, Dezāto Sahagin?, lit. Desert Sahuagin), also known as Desert Hag, SandMan, Sand Man, and Sandman is a recurring enemy in the series. True to their names, they are Sahagin-type enemies fought commonly in the desert areas of games.

The Desert Sahagin is fought around the desert near Kaipo, but are relatively weak enemies.

Desert Sahagin reappears as an enemy fought on the overworld near Damcyan, but as in the previous game, are mostly harmless to the player.

Desert Sahagin reappears once again as an enemy fought on the overworld near both near Kaipo and Damcyan during Edward's tale.

The Desert Sahagin is fought in the desert area around Cosmo Canyon as well as in the Battle Square during the time the Tiny Bronco is available. They are capable of reducing all physical damage to 1, but are otherwise not very dangerous to the player.

The Desert Sahagin is fought in the desert of Dead Dunes. They behave differently in battle depending on whether it is day or night.

The Desert Hag is fought in the area around Aquaria, and are the first enemies the player will encounter that can counterattack.

The Desert Sahagin is fought exclusively in the Challenge Dungeons in the the Memorist and Dancer chapters, and are otherwise dummied outside the phone release.

Enemies
Retrieved from "https://finalfantasy.fandom.com/wiki/Desert_Sahagin?oldid=3239176"
Community content is available under CC-BY-SA unless otherwise noted.