...Kuja's secret palace is on the eastern side of this continent. It's buried under quicksand. You'll need a ship to get there.

The Desert Palace is Kuja's lair in Final Fantasy IX, located in the desert on the Outer Continent. It is a trap-filled underground palace entered through a mock Antlion pit. If the player tries to enter the Desert Palace for the first time through the main entrance instead of the quicksands, they cannot progress as the ladder isn't lowered.

Navigating the dungeon requires the completion of several puzzles, which involve candle lights and hidden passages. The palace security system is the Valia Pira, which the party can weaken by turning off the Bloodstones scattered across the palace. The Bloodstones also yield treasure.

Desert Palace is one of only two places where one can obtain the Namingway Tetra Master card, which can be shown to a man in Daguerreo to rename player characters. In the endgame, the palace becomes inaccessible due to an Iifa root blocking the entrance.

The Desert Palace is one of the locations from Terra that ended up on Gaia 5,000 years ago due to Garland's failed attempt to merge the two planets into one. Kuja made it his hideout.

The party enters the palace via an antlion pit, but is immediately knocked out and captured by Kuja. He blackmails Zidane into going into Oeilvert to fetch the Gulug Stone for him, holding the lives of his friends hostage, though he allows him to take three of them with him. While Zidane's party is away, Kuja gleefully reneges his promise and attempts to kill the remaining party members by dropping them from their cells to a pit of lava. Regent Cid saves them by releasing the cells, and the party searches for a way to escape Kuja's fortress. They disable Valia Pira, the palace security system, and reunite with Zidane and his party as they return with the Gulug Stone. Kuja snatches the stone and absconds with his lackeys, Zorn and Thorn, kidnapping Eiko as he departs on the Hilda Garde I.

After Kuja destroys Terra, the Iifa Tree goes berserk, and one of its roots blocks the palace entrance.
Spoilers end here.

When Zidane is choosing his party for his trip to Oeilvert, the order in which Kuja calls them in their cells depends on the characters' priority. Eiko has top priority over the non-Zidane party members. Steiner has the next highest priority, followed by Vivi, Freya, Quina, Amarant, who can only be called as early as second, and Dagger, who will always be called last. If Vivi is among the ones chosen to join Zidane, then prior to being teleported to meet him by two black mages, one of them will wonder if Vivi wants to know why they are aiding Kuja. Vivi says he would have likely done the same in their position.

The party leader in Desert Palace depends on whom the player chooses to send with Zidane to Oeilvert, and who is left behind. Eiko again has the highest priority, followed by Steiner, Vivi, and Freya. Quina, Amarant, and Dagger, the three characters with the lowest priority, cannot lead the party in this area. If Steiner leads the party, and Dagger is in his party, he will ask if she is all right after they escape from their cells. She cannot answer since she is without her voice at this time. He is the only party leader who shows Garnet specific concern.

To enter the Desert Palace the player must find the four quicksand pools in the Kiera Desert on the Outer Continent. While the three pools shooting clouds of sand contain Antlions, the northwest-most pool will allow entry to the depths below.

Zidane wakes up to find he is trapped in a room with Cid. Kuja leaves Zidane no choice: to save his friends he must run an errand. The player needs to leave the room and follow the path to a pair of black mages to be teleported to Kuja's room.

Walking to the right to speak with Kuja progresses the story. When the party to accompany Zidane has been selected, they will be summoned from their cells and teleported to the dock.

The party finds the Hilda Garde I airship in the dock. Zorn and Thorn pilot it to their destination of Forgotten Continent.

The party left behind in the cells are told that a timer has started opening the cell floors, and will only stop if Zidane is back in 10 minutes. Cid on the outside hears this and has to save them.

In control of Cid, the player follows the path to the right to enter the Torture Chamber. A timer will start at 6 minutes for Cid to inch towards the Hourglass Key leaning against the caged Hedgehog Pie. Once retrieved, Cid moves to the scales and must choose the correct combination of weights to imbalance the scales and allow him to climb up to the hourglass mechanism. The player simply needs to place the heaviest three weights to one side. Once turned it frees the party.

Through the right door Cid just left the party will find a moogle to save and shop.

The player needs to light the candles on the left by the statue to illuminate the bloodstone on the right. Examining the bloodstone receives the Promist Ring.

There are three statues in this area. The front two follow the party's movements, but they can't follow movement that is close to the balcony. The player needs to have both heads face out to conjure a path of light behind the third statue, and then follow the path to reach a balcony in the palace lobby where there is another candle. Lighting the candle and returning down the path finds a chest containing Fairy Earrings.

The party must light the first three fire bowls on the left side, and then proceed through the door to the other side of the room, where they can light the bowl on the left to make the statues on the left disappear. Going back around and lighting the two bowls in the middle, makes the right statues disappear also. All other bowls on the right must be lit before the last center bowl can be. When all bowls are lit, a bloodstone will appear. Examining it receives an Anklet. The party can leave through the right door.

Light the last candle in front of the statue to illuminate a bloodstone, examining obtains the Shield Armor.

The player needs to follow the path around and up the stairs to find another candle, then keep going to the library.

Lighting the candles on the lower left side conjures a staircase on the right. Using them, the player can light the candles on the upper left and open a doorway. Examining the bloodstone receives an N-Kai Armlet. Going back and climbing the small steps on the left finds a hint to a future puzzle in the bookshelf. Lighting the candles opens another doorway. The player must light both candles in this passage and return to the library. Lighting the last candle on the lowest level opens a doorway to another candle, that once lit, lets the party return and walk through the stained glass window on the left to see a moogle.

Lighting both candles earns a bloodstone containing a Black Hood. Going through the door to the left and repeating the same earns a Venetia Shield. The player needs to extinguish the left candle under each statue to make a staircase appear, climb it, and light the last candle to fight Valia Pira.

Cid's quest to save the prisoners[]

When the prisoners are in peril of falling to the fire at the bottom of their prison cells, Cid sets out to save them. He has six minutes to complete the scenario.

To sneak past the Hedgehog Pie the player must tap

when the monster is looking away. If the player moves when the Hedgehog Pie is looking at Cid, they must start again from the beginning. After getting close enough, Cid will get the Hourglass Key item.

The next step is to place the weights on the scales. The correct combination is: clay, stone, and iron. After placing the weights, the player must climb onto the scales and turn the hourglass.

Mojito is a moogle in Desert Palace, who delivers a letter to Mogsam in another part of the palace:

The Namingway Card can be obtained from Kuja's room in Desert Palace after Zidane and his party return from Oeilvert, and after Eiko has been kidnapped. Before exiting the room, the player can search the left side of the room to find the card.

Every enemy in the Desert Palace, save for Valia Pira, has a multiple of five. If Quina is in the party and knows LV5 Death, the party will have little to no trouble progressing.

The world map areas near the palace consist of Kiera Desert, Falstead Coast, Shengalasta Shores, and Korua Island. The below chart shows enemy encounters since "disc 1" though it is not possible to come here yet at that point in a normal playthrough. Ragtime Mouse can also appear in forests.

Multiple themes play during the party's time at the Desert Palace, beginning with "The Devil's Ambition," a variation of "Kuja's Theme" also known as "Footsteps of Desire." When Kuja asks Zidane his favor, "Immoral Melody," another variation, plays. "Kuja's Theme" plays as Zidane and his chosen party make their way to Oeilvert. During Cid's "red light, green light" minigame, the cheerful "The Sneaky Frog and the Scoundrel" plays. For the rest of the time spent in the palace, "Kuja's Theme (Millennium Version)" plays.

Complementing Kuja's tastes, the Desert Palace contains many works of fine art, including a trio of statues arranged in a triangular fashion. Two of these are decidedly demonic-looking, replete with bat-like wings and tridents, and are referred to as the "Promise of the Evil God" and "Truth of the Devil." The white angelic statue in the middle is called the "Illusion of the Goddess". This is an allusion to the Warring Triad from Final Fantasy VI.

Concept art of a prison cell. 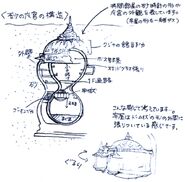 Concept art of a hallway and a library.

Concept of the scales and weights for the Cid minigame. 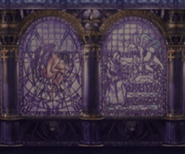 Painting seen in a battleground. 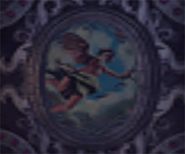 Painting seen in a battleground.

A battleground in the Desert Palace, used when fighting Valia Pira. 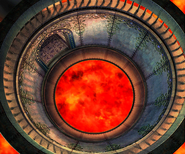 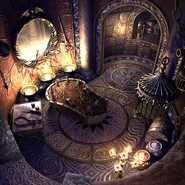