One trouble after another, eh?

Desch, also known as Desh, is a guest character from Final Fantasy III. A man suffering from amnesia, he is a capable warrior, and a bit of a womanizer despite being in a relationship with Salina. He is first met at Dragon's Peak. In the 3D remake version, he befriends Refia during his time traveling with the party.

Desch is a slender youth with teal hair and purple eyes in his 3D render and in his Amano sketchwork. He is depicted in a purple bodysuit with a single pauldron over his left shoulder. In his NES appearance, his field sprite depicts a red bodysuit and red hair, while his menu sprite depicts a green bodysuit and red hair. These are changed in the 2021 Pixel Remaster release, in which Desch has teal hair and a purple suit.

Having absolutely no memory of his past, Desch resorts to having a fondness for women, as seen when Salina can't stop thinking about him and when he tries to charm Refia. His only assurance is that he has to do something, though he cannot remember what it is. As his role in the adventure develops, he is willing to face danger head-on and thinks little of the consequences it may bring. Nevertheless, he's the first to step up when his friends are in peril.

Desch was an Ancient born of Owen and an unknown woman a millennium ago. He was an accomplished scientist, and worked with his father on projects including the Tower of Owen, which helped keep the Floating Continent created by Xande stable.

Upon its completion, Desch was placed in cryogenic sleep by Owen's invention. Desch was intended to sleep until the tower was in danger, an event which would awaken him to repair it and save the upper world. Desch was awakened 1,000 years later by a catastrophe, but his long sleep had degenerated his memories. Amnesiac and without a cause, he fell for a woman named Salina from the town of Canaan, but still felt drawn to a destiny unknown to him. He wandered off to the east to search for clues of his past.

He departed shortly before the four Warriors of the Light arrived, taking the last Mini spell with him. When the orphans are abducted by Bahamut and end up in its nest, they meet Desch in person. After following his advice to run and escaping from Bahamut's Nest, Desch gives the party his Mini spell, allowing them to enter the village of Tozus. He accompanies the party for a while afterward, in the hope he will find clues and remember his task in the party's travels.[note 1]

A part of his past is revealed in the Gulgan Gulch, where a Gulgan states Desch's destiny awaits in the Tower of Owen, and others referring to a man who can change destinies that will awaken in said tower. Intrigued, the party travels to the tower, but are dismayed to find it is malfunctioning. As the party travels up the tower, Desch remembers parts of his past.

At the top, the party encounters Medusa, one of Xande's soldiers. After defeating it, Desch recovers his memories and realizes he is the tower's Ancient guardian. Remembering how to fix the tower, he bids the party farewell before jumping into the reactor; the tower is stabilized, but Desch is apparently killed in the process.

Near the end of the warriors' quest, in the Crystal Tower, the party is immobilized by the curse of the five wyrms; Doga looks for five pure souls, the only thing that can break the curse. When he appears at the Tower of Owen, he cannot find Desch and is dismayed at his apparent demise, however, Desch climbs up from the bottom of the tower, exclaiming it is fixed. Doga mentions that Refia is in danger, so Desch agrees to travel to the Crystal Tower to help break the curse, as well as provide moral support. After the Cloud of Darkness is defeated, he returns to Canaan, where he sees his girlfriend.

In the 3D versions, Desch can help out the party in battle, either with a three-four hit sword attack or a cast of Thundara. As with all ally characters, he attacks at random intervals with his sword that is an obtainable item through cheating. However, it is unequippable by all jobs. If he appears while in Mini status, he will always cast Thundara.

Desch appears in the manga adaptation of Final Fantasy III.

Desch has appeared in the following games throughout the Final Fantasy series:

In the Final Fantasy I & II: Dawn of Souls and all subsequent versions of the original Final Fantasy, Desh is one of the automatic names the player can choose for the Warrior job. 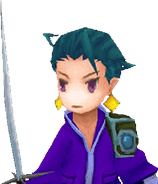 Desch attacks with his sword (PC). 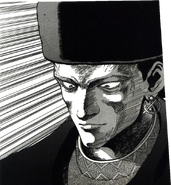 [view · edit · purge]Both Desch and its alternate romanization Desh are the Romanch and Romani words for the number ten respectively, and are derived from the Latin decem.