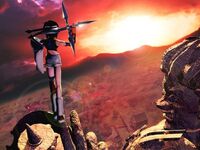 A slightly jazzier version of "Descendant of Shinobi" is available for playing on the game's jukeboxes as track 23. It is found in the Sector 5 slums train station, near to where the player meets Johnny in Chapter 14, "In Search of Hope" (though it can be acquired earlier). There is a man wearing a white hat who gives it near to where the disc plays.

"A Walk After the Rain"