Derfland is a region of central Quon in Final Fantasy XI. This massive peninsula jets out into the Bastore Sea. It nearly reaches the Grand Duchy of Jeuno at its tip. However, far from the reach of Jeuno and within the marshlands at the base of the peninsula, the Quadav continue the construction of their new city of Beadeaux. 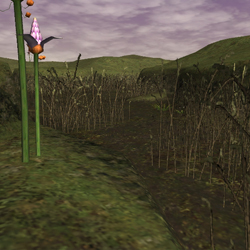 The Pashhow Marshlands, in direct contrast to the Konschtat Highlands to the south, are located near sea level, resulting in a wet, swampy landscape. The countless bogs and floating islands of vegetation make the area extremely difficult to traverse, but it is the presence of the Quadav that causes many travelers to shun this dangerous territory. Their stronghold, Beadeaux, lies in eastern Pashhow and the armored beastmen maintain a significant presence in the marsh.

The creatures native to Pashhow are typical of boggy environments. Leeches, flies, and crawlers are numerous and non-aggressive. A population of Goobbues subsists here as well, however, and its towering members have no affection for adventurers.

Derfland's regional outpost is located in the northern marsh near the path to Rolanberry Fields. A Cavernous Maw also connects Pashhow to itself twenty years in the past. 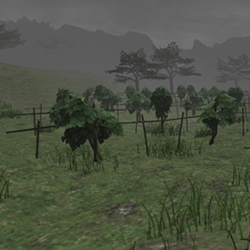 The Rolanberry Fields have been used for centuries to cultivate the fruit for which they are named. Considered a delicacy by Humes and Elvaan, the farmers in this region have perfected their craft and are now able to harvest the sweet berries year-round. Three bridges at Rolanberry's northeastern corner lead across the sea to its neighboring areas: the Lord Bolicevre Bridge to Batallia Downs, the Market Bridge to the Grand Duchy of Jeuno, and the Great Jeuno Bridge to the Sauromugue Champaign on the eastern continent of Mindartia.

A Cavernous Maw connects this area to itself twenty years in the past.

The Crawlers' Nest is a web-filled cave in southwestern Rolanberry Fields infested by the eponymous insect. While the extermination of these vermin by adventurers is approved and rewarded, the Jeunoan military has never made an effort to clear the tunnels itself. Some speculate that the lack of action by the Duchy is a consequence of the economic benefit it enjoys from the sale of silk, a valuable commodity produced by the crawlers.

During the Crystal War the nest was host to an outpost manned by the Federation of Windurst. Most of the fortifications and constructions built in that time have disintegrated.

Though crawlers are the most prevalent inhabitants of the area, a variety of other fauna dwells alongside them. Funguar, scorpions, lizards, beetles, and bees thrive in the nest. While the insects at the entrance are not aggressive, those lurking beyond the humble worker crawlers are extremely hostile.

Though the cave no longer contains anything of particular historic importance, obtaining its map is unusually demanding. At the behest of Abelard, the mayor of Selbina, adventurers must trudge up and down the length of Vana'diel in search of fifteen stone monuments left by Gwynham Ironheart. Only having done so may they finally receive a map to chart paths through the nest.

Beadeaux is the primary stronghold of the Quadav. It was established deep within the Pashhow Marshlands, far from the reach of Bastokan and San d'Orian forces, during the Crystal War. To continue the construction of their city, they have relentlessly stolen large quantities of non-rusting mythril from Bastok. They have also adopted the metalworking techniques of the Republic's craftsmen.

Beadeaux's unique topography, with a little help from rudimentary constructions, forms a natural fortress. A narrow entrance extends from Pashhow and visitors find themselves standing in mud and surrounded by earthen walls on all sides. To travel from place to place, adventurers must brave the stronghold's maze-like tunnels and emerge elsewhere in the swamp.

The Quadav have constructed massive devices that curse passerby at multiple locations. To avoid this malady, wayfarers must use separate artifacts, the so-called "mutes", to inflict the silence status upon themselves. The presence of these structures makes traveling through Beadeaux slow and dangerous. Its deeper reaches are also occupied by increasingly powerful Quadav as they defend the Qulun Dome and the seat of their master, the Adamantking.

Qulun Dome is a dark chamber beneath the Beastmen stronghold of Beadeaux. It is the throne of the Quadav leader, Za'Dha Adamantking. Rumors of magicite stored here are of great interest to the Alliance of Altana.