Non-player character
Deneh is the other known living member of Red XIII's unnamed species, appearing briefly Chapter 18 of Before Crisis -Final Fantasy VII-. Together, she and Red XIII, called Nanaki in Before Crisis, were to perform a ritual held every fifty years in Cosmo Canyon to appease the Planet. A male and female guardian were required for the ceremony, but Nanaki shows fear at the prospect of performing the ritual. Deneh considers him a coward.

That day, the Turks are sent to Cosmo Canyon to capture a member of the species for Professor Hojo. The Player Turk comes upon Deneh to capture her, but Nanaki moves to protect her. The Turks capture Nanaki, but Deneh escapes, knowing Nanaki is not a coward. As part of the ritual, she is placed in an altar for several years, which explains her absence throughout the current continuity of the series.

It is speculated that the cubs seen with Nanaki at the ending of Final Fantasy VII may be the children of him and Deneh. 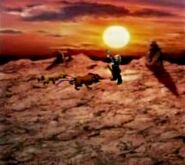 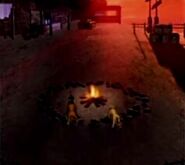 Diné is the name of the Navajo people in their native language.