Demonolith is a fiend in Final Fantasy X encountered Inside Sin and in the Omega Ruins. It is a dangerous enemy that can be difficult to defeat.

It has the appearance of a fossilized monster inside a large stone slab. It has five claws that protrude from the slab, which are its means of melee attacks. On its back it has a fossil based on the Elvoret boss from Final Fantasy VIII.[1]

Who makes these things!?

Demonoliths use two basic attacks; its normal Claw attack is not terribly strong, but may inflict the Curse and Zombie statuses, while its other physical attack, used against aeons, is stronger and has perfect accuracy. It will not act when facing Valefor.

A Demonolith's Breath attack has a high chance to petrify all party members, and is used after being targeted three times. Its meanest trick is the Pharaoh's Curse counterattack, inflicting Darkness, Silence, Poison and Curse. Pharaoh's Curse won't be used in retaliation against special damage or aeons.

When encountered in the Omega Ruins, it will have Initiative.

Stoneproof armor protects the party against Demonolith's breath attack. In the Omega Ruins, the party should always have at least one character equipped with a weapon that has First Strike to avoid being ambushed. Inside Sin, this is not an issue.

A weapon with Silencestrike or Wakka's Silence Buster attack can be used, as Silence will prevent Pharaoh's Curse. Another option is to use Threaten to stop Demonolith from acting. They can be slowed down with Slow as well. Using Armor Break or piercing weapons will be useful when in Silence status.

The best strategy is to bring in an aeon to avoid the status attacks and to damage it severely. Demonoliths are helpless against Valefor due to her status immunity and "out of range" status. 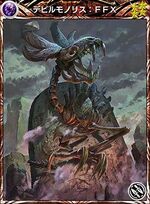 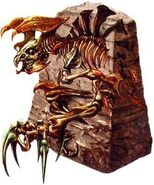 Its name is a portmanteau of "demon" and "monolith".

[view · edit · purge]A monolith is a geological feature consisting of a single massive stone or rock, or a single large piece of rock placed as, or within, a monument or building. In architecture, the term has overlap with megalith, normally used for prehistory, and may be used in the contexts of rock-cut architecture that remains attached to solid rock, or for exceptionally large stones, such as obelisks, statues, monolithic columns, or large architraves. It may also be used of large glacial erratics moved by natural forces.

The word derives, via the Latin monolithus, from the Ancient Greek word μονόλιθος (monolithos), from μόνος ("one" or "single") and λίθος ("stone").

Retrieved from "https://finalfantasy.fandom.com/wiki/Demonolith?oldid=3380937"
Community content is available under CC-BY-SA unless otherwise noted.