Demon Wall (デモンズウォール, Demonzu Wōru?), also known as EvilWall and Demons Gate, is a recurring boss in the Final Fantasy series. It is usually depicted as a large, demonic monster encased in a giant slab of stone. Mostly set as traps in tombs and temples, Demon Walls' attacks often cause Petrify. They slowly approach the player party with the intent of crushing them into the wall parallel to it, giving the player a time limit to defeating them. 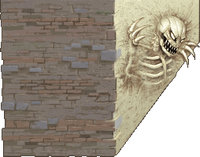 The Demon Wall (EvilWall in the SNES and PlayStation) is the final barricade to get the last Dark Crystal in the Sealed Cave. The Wall slowly closes in on the party, using a weak physical attack. When it reaches the party it uses Crush, an instant death attack with a 100% success rate.

The Demon Wall is a boss of the Sealed Cave guarding the crystal room.

The Demon Wall is an enemy in Rydia's challenge dungeon. They appear frequently throughout the dungeon.

The Demons Gate attacks the party at the end of the Temple of the Ancients, just before the Black Materia room. Demons Gate is fast, and uses powerful attacks. It does not slowly move forward, but does have an attack called Demon Rush in which it charges up and hits the party for heavy damage. The battle is the last time Aeris is playable. 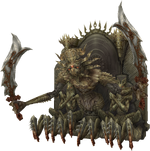 The Demon Walls are the two guardians of the Tomb of Raithwall, and are said to have Raithwall's likeness. These Demon Walls are very mechanical in appearance. Both slowly move towards the party, and if they reach the end of the hallway, the player gets an instant Game Over. Instead of trying to overpower the party, they try to slow the party's attacks by inflicting status effects and using their unique attack, Telega, which inflicts X-Zone on all targets in range. Defeating both Demon Walls allows access to a secluded area of the tomb.

The Demon Wall is the second boss of Amdapor Keep. It knockbacks party members and then advances a few meters. The fight takes place on a bridge-like structure without railings, and standing in the wrong position for the knockback can push a player off the bridge and thus kill them. A player killed in this manner cannot be revived during the ongoing battle. A void pitch covers the back of the hall, dealing damage to party members who stand on top of it. Four Demon Walls reappear in Patch 2.5 at Amdapor Keep (Hard). The players have at least 3 minutes to defeat the waves of enemies or they will be wiped out by the Crash Down.

The "Demon Brick" minion is miniature Demon Wall pet. Players can also craft an inanimate frieze of the Demon Wall as wall-mounted furniture for player housing.

In the Heavensward expansion, within the Great Gubal Library dungeon, the first boss is a Demon Tome. Its appearance and fight mechanics are similar to the Demon Wall in Amdapoor Keep, but its design is that of a giant book, acting as a wall across the passage.

The Great Gubal Library (Hard)'s first boss is the Demon of the Tome. When players enter the hall where the Demon Tome was found, they find another, but as they approach it, the Demon possessing the tome exits, revealing its massive bipedal form. This marks the first time the full form of a demon wall enemy has been seen.

Daemonwall is a daemon fought during the A Wall in our Way Hunt. It is a high level enemy with very high HP and decent strength. There is also a Daemonwall near Galdin Quay in Chapter 14 when Noctis is the sole party member.

A large, mechanical wall with a demonic skull motif that resembles Demon Walls serves as an obstacle in the Pitioss Ruins.

The Demon Wall appears in the second half of the sidequest "The Stone With No Name" in the Ruins of Delgantua. It inflicts multiple status effects that stop movement of characters. It then uses Repel to push characters off the edge of the battlefield to their deaths.

Demon Wall appeared as an enemy.

Demon Wall.
Add a photo to this gallery

The Demon Wall is a boss. 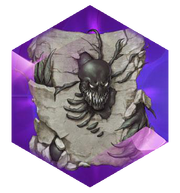 A demon living within a wall, usually trapping adventurers as it creeps closer and closer.

Demon Wall is a summon that protects the summoner from the decrease of his/her Bravery points for a determined period of time.

Demon Wall can be summoned by two ways: automatically by inflicting a HP attack on the opponent, or by having Bravery equal to or lower than half of its base value, where its Final Fantasy XII artwork appears; and manually, where its Final Fantasy IV artwork appears. Both Demon Wall versions are obtained in Destiny Odyssey VI: the auto version in the third stage and the manual version in the second stage.

In Dissidia 012, Demon Wall's auto version is found in Chapter Two: Wisdom or Courage? of Scenario 013. The manual version can be purchased from certain Moogle Shops for 30 KP.

Demon Wall is a boss.

Final Fantasy XII
Add a photo to this gallery 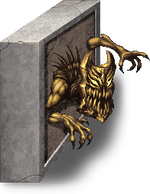 The Demon Wall is a boss during the Mysidia Chapter. It is a monster conjured through Veritas of the Earth's Shield, which makes up the bulk of its "face". The Demon Wall is also summoned as his Limit Burst, damaging enemies and increasing damage reduction to the party.

Demon Walls frequently appear as final enemies. They are Dark-aligned and difficult to kill, as they draw Life orbs, nullify status buffs, and drain a player's Ultimate gauge while preventing it from filling. They buff themselves with various effects including Regen. The only way to defeat one is to deplete its Break Gauge, causing it to crumble on its next turn.

[view · edit · purge]A demon is "an evil spirit or devil, especially one thought to possess a person or act as a tormentor in hell."