An axe of colossal size.

Demon Axe is a mid to high-ranked axe found exclusively in the 3D remake, providing 116 Attack and +2 Strength and Agility. It can be bought for 40,000 gil at Falgabard, and can be equipped by the Onion Knight, Warrior, and Viking classes.

The Giant's Axe is the strongest axe, found in Alive Forest. It has an Attack power of 105.

The Afreet Axe has an attack of 23. It can be randomly found in the chest on the 90F inside Moonsand Ruins, Holy Tree Tower, Mysterious Lighthouse, and Trial Tower.

Demon Axe is a mid to high-ranked axe that provides 66 Attack, 5 Hit, can inflict Curse, and deals extra damage when used against Machines.

A large axe said to have been dropped by a demon. It holds the power to slightly increase the user's HP. One can easily tell the dark aura shrouding the axe, which is powerful enough to obliterate holy objects with a single blow. The drawback is that it is very heavy, making it difficult to handle. Seeing a person swing this axe, cleaving away at monsters, portrays an image of intense savagery akin to demons.

A double-edged war axe which boasts an immense destructive power. Power brims throughout the entirety of the axe, generated by the black crystal embedded in the center of the axe-head, and an extraordinary amount of energy is released the moment its wielder attacks. Average shields and armor are rendered ineffective and torn as easily as paper when facing this axe. There were doubts of its existence until recently, when it became apparent that a group of monsters keep it secretly in their possession.

Demon Axe is an axe that provides 65 ATK, HP +5%, and is Dark-elemental. It is obtained by finding and turning in the Black Key found at Forgotten Walls.

Demon Axe (FFBE) is an axe obtained as the reward for clearing Scorn of Great Explosion Festival. It provides 165 ATK, +50% accuracy, has a damage range of 110-190%, requires both hands to wield, and increases physical damage against stone enemies by 75%. 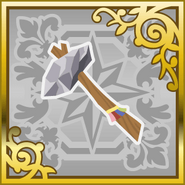 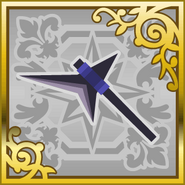 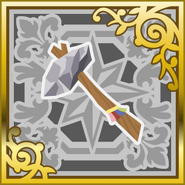 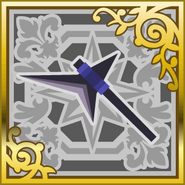