'Tis your birth and faith that wrong you... not I.

Delita Heiral, also known as Delita Hyral, is a character from Final Fantasy Tactics. In Chapter 1 he is a guest, but later is directly under the player's control in two side battles that take place away from the main plot with Ramza and his party, although this only happens in the Final Fantasy Tactics: The War of the Lions version.

Delita's story is widely known through Ivalice as that of a commoner who became a king and brought peace to a chaotic kingdom, while Ramza, his friend, is of little mention in history, and is branded a heretic. Arazlam Durai, a historian researching these events many years later, narrates that history has made Delita the only hero of the War of the Lions. Arazlam asks the player to consider if this is the "truth", and if they will help Arazlam find the true answer. Arazlam's research forms the frame story for Final Fantasy Tactics.

Delita has short, slicked back brown hair and brown eyes. As a squire he wears a buff coat and squire armor, thigh high boots, brown gloves and a large belt wrapped around his abdomen. After he becomes a holy knight, Delita wears Templar-like golden armor over his arms, legs and shoulders, a golden belt and red clothing.

After further advancing his schemes, Delita dons a long red and gray cloak with white linings and pale yellow sash in front to combine with his primary outfit. This outfit is later seen where his job as an Ark Knight in the Rendezvous. As king, Delita wears an elaborate red and white mantle with golden armor.

Ultimately an idealistically honorable man who views himself a people's hero, Delita holds to the maxim that the ends justify the means. After his sister, Tietra Heiral, falls victim to a conspiracy, Delita vows never to succumb to manipulation again. In a self-driven crusade against the nobility, Delita pursues the throne via forming numerous allegiances with different factions and persons, all the while intent on double-crossing them all.

Despite using false allegiances and conspiracies to deceive his contemporaries, Delita is not ruthless, as he is willing to spare the lives of some of the people who get caught up in his schemes, and he is planning to rule Ivalice in a just manner.

Allegiance to the Order of the Northern SkyEdit

Delita was born to poor farmers on the Beoulve land. Barbaneth adopted him and his sister, Tietra, into House Beoulve after their parents succumbed to the Black Death. Delita and Tietra became fast friends with Barbaneth's children Ramza and Alma Beoulve. While growing up, Delita attended the Gariland Royal Military Akademy with Ramza, and the two rescued Argath Thadalfus from the Corpse Brigade, a rebel group who opposed the nobles.

Argath revealed Marquis Elmdore had been kidnapped, and when Ramza defied his elder brother Dycedarg's orders and set out to rescue him, Delita accompanied him. They succeeded and were assigned to attack Milleuda Folles, a Corpse Brigade leader, at the Brigands' Den. During the battle the reasons for the Corpse Brigade's actions became apparent, as this was a class struggle. This created a rift between Delita and the arrogant upper-class Argath. Following Milleuda's first defeat, Delita and Ramza returned to Eagrose, only to learn the Corpse Brigade had taken Delita's sister captive under the impression she is a noble due to living with House Beoulve.

Zalbaag Beoulve, Ramza's other elder brother, launched a frontal assault on the Brigade's positions at Ziekden Fortress, and Delita realized this would likely kill Tietra. He tried to convince Ramza to rescue her by attacking from the Lenalian Plateau. When an unsympathetic Argath insulted Delita, Ramza stood up for his friend, and kicked Argath out of his unit, and Argath joined Zalbaag's force in their attack on Ziekden. Ramza and Delita set out to rescue Tietra, and at Mandalia Plains shared what was to be their last moment together under the circumstances, for the attempt to rescue Tietra met with disaster.

Ramza and Delita re-encountered Milleuda at the Lenalian Plateau and the misunderstanding between Ramza and Milleuda resulted in the latter's death, which infuriated her brother, Wiegraf, leader of the Corpse Brigade. Although Delita and Ramza were close to rescuing Tietra at the windmill hut, a fencer of Wiegraf's forces, Gragoroth Levigne, took her as a hostage to Ziekden Fortress.

Delita and Ramza arrived to find a standoff between Gragoroth, holding Tietra captive, and the Order of the Northern Sky led by Zalbaag and Argath. Argath opened fire, mortally wounding both Tietra and Gragoroth. Zalbaag left to pursue Wiegraf, and Delita's rage boiled over against Argath. He attacked, and Ramza joined him in battle. Argath was killed, but Gragoroth set off an explosion which destroyed the fort. Delita, standing next to Tietra's body, would have perished, had her body not shielded him from the explosion.

Following the Ziekden Fortress incident, Delita set himself up as an Order of the Southern Sky knight, while also answering to the Church of Glabados. He is loyal only to himself, and plans to double-cross both.

Several Church of Glabados knights, wearing Southern Sky uniforms, attack Orbonne Monastery, where Princess Ovelia is staying. While Ramza as part of Goffard Gaffgarion's mercenary unit (having denounced his life of nobility after the events at Ziekden Fortress), and Agrias Oaks, the princess's knight, drive off the fake Southern Sky knights, it was but a diversion. Delita slips into the monastery from the back and kidnaps Ovelia, escaping on his chocobo before Agrias can react.

Ramza, recognizing Delita, is amazed he is alive and sets out to pursue him. At Zeirchele Falls Delita runs into trouble, allowing Ramza's forces to catch him. Gaffgarion turns on Ramza and reveals his true assignment: kill Ovelia so Duke Goltanna can't use her claim to the throne. Ramza drives off Gaffgarion and helps Delita rid of his attackers and Delita relinquishes control of Ovelia to Ramza. When Ovelia falls into the hands of Cardinal Alphonse Delacroix, Delita arrives, and after the leader of the church's Knights Templar, Folmarv Tengille, has interrogated her, he takes the princess to Goltanna. On the way they are attacked by three Northern Sky soldiers, but Delita drives them off.

Delita begins his betrayal of the Southern Sky and Goltanna. After ridding Goltanna of a treasonous adviser, Chancellor Glevanne, Delita succeeds Baron Grimms as commander of the Blackram Knights after the Baron was killed in a battle against the Order of the Ebon Eye rebels in Zeltennia. The High Confessor also creates friction between Goltanna and Cidolfus Orlandeau, a noble and legendary war hero.

Delita is tasked with assassinating Goltanna by the Church of Glabados that wants the war to escalate and throw Ivalice into a turmoil where the church could rise into a more prominent institution. He is offered the aid of Valmafra Lenande, although Valmafra is, in fact, ordered to keep an eye on Delita.

Delita meets Ramza at the church near Zeltennia where he reveals more of the church's plan. He had been noticed by the Heresy Examiner, Zalmour Lucianada, who had come to arrest Ramza for having allegedly killed the Cardinal Delacroix. Delita knows that since Zalmour is aware of his intentions to double-cross the church, he has no choice but to kill him. Thus he aids Ramza in the battle before returning to deal with Goltanna.

At the battle of Fort Besselat Delita assassinates Goltanna and implicates Orlandeau in the murder, but executes a decoy to allow the real Orlandeau to escape and assist Ramza in his quest to destroy the Lucavi demons that have possessed many church officials and templars, and are thus behind its nefarious plot to dominate Ivalice. The Glabados Devout who acts as Orlandeau's double is possibly tricked by Delita to die for Duke Goltanna's assassination, because the church has actually ordered Delita to assassinate Goltanna and Orlandeau altogether. Delita confronts Valmafra, whom he knows to be a spy, but she is unable to bring herself to take action against Delita.

Following the Lucavi leader Ultima's destruction at the hands of Ramza, Delita marries Princess Ovelia and becomes the King of Ivalice. Ovelia becomes disturbed when she realizes she was nothing but a pawn to Delita like everyone else. On the day of her birthday Delita brings her flowers, but Ovelia stabs him with a dagger. Delita responds by stabbing Ovelia, and collapses while wondering about the different paths in life he and Ramza had chosen, and whether Ramza's brought him happiness.

Delita likely survived the dagger wound, as in the official record, he maintained a long and peaceful rule while Ramza was never mentioned. Orran Durai, who was publishing an account of the truth, was executed by the church as a heretic, but his descendant, Arazlam Durai, would discover his Durai Papers and learn the truth. 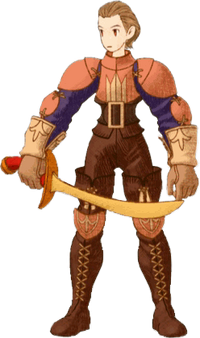 At the start of Chapter 1, Delita joins as a guest character as a level 1 Squire with 71 Bravery, 55 Faith, and equipped with the Broadsword, Leather Cap, and Clothing. Delita is controlled by the AI and will not permanently perish if KO'd.

During Chapter 2 at Zeirchele Falls, Delita returns as a guest character as a level 11 Holy Knight with 75 Bravery, 50 Faith, and comes equipped with the Coral Sword, Mythril Shield, Plate Mail, and other pieces of equipment that are randomized. He has access to the powerful Holy Sword command, and his other abilities are randomized. During this battle, he is immune to the Chicken, Toad, Charm, and Doom statuses.

During the second battle at Zeirchele Falls, found exclusively in the War of the Lions version, and occurring right after the initial battle at Lionel Castle, Delita is temporary controllable and is a level 25 Holy Knight with 85 Bravery, 40 Faith, and comes equipped with Ancient Sword, Golden Helm, Golden Armor, and Germinas Boots. He comes with the Holy Sword and Arts of War commands, as well as the Counter, Move +1, and Safeguard abilities.

During the battle at Zeltennia Castle's Chapel Ruins, exclusive to the War of the Lions version and occurring right after the battle at Walled City of Yardrow, Delita is controllable as a level 30 Holy Knight with 85 Bravery and 52 Faith, and comes equipped with the Save the Queen, Platinum Shield, Platinum Helm, Carabineer Mail, and Germinas Boots. He still has access to the powerful Holy Sword and Arts of Wars commands, and now uses Parry, Concentration, and Move +1. He is now innately immune to all negative statuses except Chicken, Toad, Charm, and Doom.

The final time Delita is a guest character is at Zeltennia Church, where his level is based on the party's and starts with 75 Bravery and 50 Faith. He comes equipped with the Runeblade, Platinum Shield, Circlet, Bracer, and Carabineer Mail. He still has access to Holy Sword, though his other abilities are random. He is innately immune to Chicken, Toad, Doom, and Charm.

After the events of Fort Besselat Sluice, Delita's job will be Arc Knight. This version of Delita does not participates in any of the battles and only appears in cutscenes. Delita's ability are the same as those of the Divine Knight job; Unyielding Blade which contains Crush Armor, Crush Helm, Crush Weapon, and Crush Accessory.

When fought in the fourteenth Rendezvous battle: Brave Story, he is level 99 and starts with 97 Bravery and 60 Faith. He is equipped with the Chaos Blade, Escutcheon II, Grand Helm, Lordly Robes, and a Ribbon. Oddly enough, the Ribbon happens to be a head equipment equipped in his accessory slot. He has access to the Holy Sword and Iaido commands, as well as to the abilities Shirahadori, Safeguard, and Move +3. He is immune to Chicken, Toad, Charm, and Doom.

Delita has appeared in the following games throughout the Final Fantasy series:

Delita has made key guest appearances in the following non-Final Fantasy media: