Guado Guardian A: Lord Seymour's commands must be obeyed. You will come!
Guado Guardian B: I warn you, the maester doesn't need you alive.

Defender X is a boss from Final Fantasy X fought near the bridge between the Calm Lands and Mt. Gagazet. It is called into battle by two Guado guards who block the path under Seymour's orders.

Defender X is a heavily armored mech construct that can do lot of damage with normal attacks. Its special attack, Haymaker, can potentially KO a character outright.

Once Defender X's HP drops past 10,000, it will cast Mighty Guard on itself, and begin to use Slowga on the party. Its most dangerous attack is Blast Punch, which halves one party member's HP.

A good way to start off the battle is to use Auron's Armor Break and Wakka's Dark Attack to blind it. If Lulu has learned any level three spells, she can be used to great effect, and the damage she can do will be improved if Auron wipes out Defender X's Magic Defense with Mental Break.

An easy way of defeating Defender X is to have Tidus provoke it. This way the boss will only use Blast Punch on that character, and since the attack only halves the current HP, the character will not risk being KO'd. This method also applies to the Defender Z enemies found in Zanarkand and the Omega Ruins.

Another way is to have Yuna's summons at max Overdrive gauge before encountering the boss and use the aeons' Overdrives. If the player summons an aeon it should use Overdrive right away, because the Defender X can kill them in one hit. 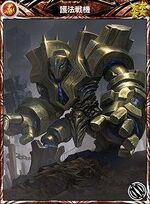 Haymaker.
Add a photo to this gallery

Retrieved from "https://finalfantasy.fandom.com/wiki/Defender_X?oldid=3238148"
Community content is available under CC-BY-SA unless otherwise noted.