Cid Pollendina: Oh, shut up and help me remodel the Defend (ability) page!
Please expand this article into a full one. The following tasks need to be completed:

Reduce damage until next command

Defend (ぼうぎょ, Bōgyo?), also known as Guard and Def., is a recurring ability in the Final Fantasy series. The user takes a defensive stance to reduce the damage they take. Depending on the game, sometimes a status of the same name is applied when using the ability.

The Defend command reduces damage taken for the turn in which it is used. It only appears in the 20th Anniversary version and ports.

The Defend command reduces damage taken for the turn in which it is used. It only appears in the 20th Anniversary version and ports.

Many jobs have access to the Guard command, which defends against incoming physical attacks.

Defend (Parry in the early English version) is a command. Whenever a character uses the Defend command, they gain the Defend status, which lasts until the character's input window is displayed. While in this status, the character's Defense is doubled.

Defend is a command that doubles the user's defense.

Defend (Def. in the older translation) is also a regular command everybody can access by pressing the cursor to the right while in battle, in which the character takes a defensive position that lasts until their next move, taking less damage for its duration.

Every character except Umaro can access the Defend command by pressing

Every character has a Defend command accessed by pressing

in the character's battle menu. The character takes a defensive stance, gaining a status that causes them to take half damage from physical attacks until their next turn.

Zack can guard with

. If timed right, Zack will take much less damage from attacks. Zack can also defend against magical attacks in this manner.

The player can defend with

to mitigate damage by 40% (60% for Cloud in Punisher Mode) and avoid being knocked back by enemy attacks. Guarding against attacks fills the user's ATB gauge, and the effect is magnified with the

Steadfast Block Materia equipped. When Cloud defends against an opponent's attack in Punisher Mode, he will also immediately retaliate if the enemy is close enough, though some attacks cannot be defended against and only break Cloud's defensive stance. The player can switch between Operator and Punisher Mode to switch between defending and countering on-the-fly. AI-controlled party members tend to guard a lot.

Defending as a toad.

The Guardian Forces Brothers and Cactuar learn Defend as a command for 100 AP. It grants the user immunity to physical attacks and halves magical damage. If the user is attacked by a physical attack that would cause a status effect, the status ailment will never be applied. The status lasts until the character picks their next move.

Counter and Cover still activate while defending, so it is good to use this particular setup on the character in the middle of the party formation. Defend is also especially useful for Selphie when fighting enemies that only use physical attacks, such as T-Rexaur: a HP Critical health Selphie can put up the Defend command and on her next move safely shuffle through her Slot Limit Break while being immune to damage.

Every character has access to the Defend command by holding

in the command window. Any physical damage on the defending character is halved and the effect stacks with the ability Distract or by having the attacker under the Confuse or Darkness status effects.

Defending 50 times earns the The Best Offense achievement/trophy in the versions that support an achievements system.

Zidane defending while equipped with a dagger.

Zidane defending while equipped with a dual sword.

This gallery is incomplete and requires Beatrix defending, Blank defending, Cinna defending and Marcus defending added. You can help the Final Fantasy Wiki by uploading images.

. When defending, damage from physical attacks is halved. This, again, causes the status Defend. It is a Rank 2 ability, which means it takes less time to recover than from a regular Attack. 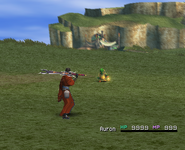 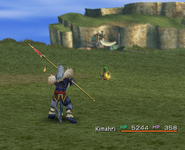 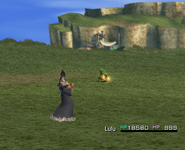 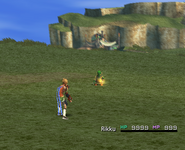 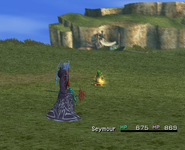 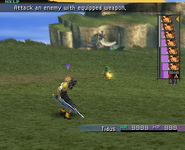 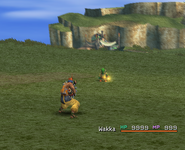 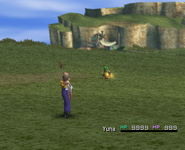 Guard is a basic ability that increases Physical and Magic Resistance by 40% for as long as it is held. It has an ATB cost of 10 and drains 3 ATB per second.

Defend oneself against an attack. Adds the Defend command.

Defend is a support ability the Squire job learns for 50 JP. Equipping Defend in the support ability slot will add a Defend command in the unit menu. This ability doubles the character's chance of evading an attack until his next turn and starts the character CT from 20 rather than 0, meaning earlier action in the next turn. Thief's reaction ability, Vigilance, can trigger the defending stance when the user is being attacked.

Guard is a Warrior Battle Skill ability, which starts at level 1 and can be leveled up to 100. It has a chance of reducing physical damage by half, and the chances of this happening increases the higher the ability's level is.

Defense is a command that guards from an enemy's attack and reduces some of the damage taken. By defending an ally, the character will do nothing for one turn while waiting for an attack.

When walking on the world screen or in dungeons, the player will encounter enemies. If they touch an enemy, they will receive damage at once. The only way to prevent damage is to either avoid the enemy, or touch him with their shield. The shield will only work if it is equipped, they have the appropriate type of shield, and Sumo's level is higher than that of the enemy. If they have met all these requirements, the player will be able to push the enemy from the path using the shield.

Defense only has 30 uses, and increases a Robot's HP by 9 when equipped on them. It blocks melee attacks with a 50% chance of success and taking no damage if successful.

The Boost command is equipped to every playable character by default, and lets the user conserve their Action Points without taking a turn. They take less damage from enemy attacks on their Boost turn, making the Boost command comparable to the Defend command in other Final Fantasy titles.

Characters can guard against attacks with the Ground Block and Midair Block abilities, which all characters know innately. Depending on the Damage Priority of attacks, the character can block the attack successfully and stagger their opponent, leaving them open to counterattack, they may fail to block and stagger themselves, or their block may be pierced and the attack do full damage. Some attacks have built-in Block effects, such as Firion's Shield Bash or Sephiroth's Scintilla.

The Block command returns with the same function as in Dissidia, though various moves have different damage priorities determining if they can be blocked or not. The Precision Block ability allows a character to block all blockable attacks regardless of damage priority, but they will stagger if they block an attack that would normally stagger or pierce a normal block.

The Defend command is available to all characters, has no limit of uses, and has no Charge Time. A defending character takes halved damage from most attacks, physical or magical, until the next time the player inputs an action for the character.

The Defend command is unavailable when a character is in Burst Mode.

This section about an ability in World of Final Fantasy is empty or needs to be expanded. You can help the Final Fantasy Wiki by expanding it. 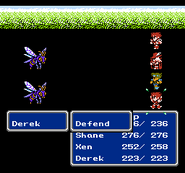 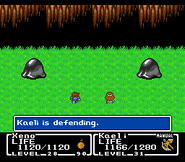