The Deep Eyes squadron is a elite military force in Final Fantasy: The Spirits Within. They are a trooper military branch of the United States Military Force (USMF), split into squads, each with their own commanding officers. The squad operating under Captain Gray Edwards was specialized in the combat and eradication of Phantoms in the wastelands. Thanks to the advancements in bio-etheric technology, the Deep Eyes squad and the rest of the USMF are outfitted with weaponry capable of countering the Phantom threat.

The Deep Eyes are outfitted with the latest in Bio-Etheric weaponry, and plenty of other military-grade gadgets.

A concept of the Serpent (Nocturne) Rifle. 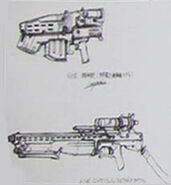 Concepts of other sidearms. 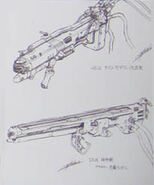 Final Fantasy: The Spirits Within
Retrieved from "https://finalfantasy.fandom.com/wiki/Deep_Eyes?oldid=3206466"
Community content is available under CC-BY-SA unless otherwise noted.