Debug room
The Debug Room is an area within Final Fantasy VII meant exclusively for the game developers. It is filled with "links" to various game content, such as FMVs, battle scenarios, and towns, for the purpose of testing the actual content to see if it would work as intended in the game.

That said, there are no legitimate means of accessing the Debug Room; although it has been left in the game coding, this was done not because the developers wanted players accessing the area, but because removing the code would likely create more errors than doing so was worth. It can be accessed via a cheat device, Yuffie Warping, or memory hack.

If the player selects a warp option within a room, leaving the area will then warp them to the area they last saved their game at before entering the Debug Room. The options found within the rooms can have varied results depending on whereabouts in the game the player is, for example, if the player has a character or characters in the party that are not normally present in the option that they have selected, that character may not appear at all in certain scenes, or their HP may drop to zero immediately after a battle begins. This does not always seem to apply to Aeris, who can appear in options past those that take place after events at the Forgotten City in disc 1.

The easiest ways to get into the Debug Room are via hacks or save editing. With a save editor, the player can start in the "startmap" area to get to the Debug Room. For the PlayStation version, a Gameshark code can be used:

There are ten rooms available to enter from the lobby, arranged in a circle. The appearance of the lobby in the NTSC and PAL versions differs from that of the Japanese, in that NTSC/PAL players will land in a black room, and will have to bring up the finger icon to indicate where the rooms are, though two rooms have no marker and the player will have to gauge their location based on where the others are.

Each room contains numerous characters and has a practical testing use. Most characters present warp options, sending the player to various locations and scenes within the game, though not all will work as intended and leave the player trapped, unable to move. Others change party setup, alter the player's inventory, or allow viewing of FMVs. Some options will crash the game and so the room should always be used with caution.

Standing by the southwest corner of the room is Yuffie, who presents the player with a main menu of options: 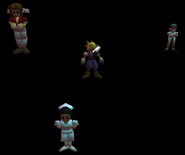