Deathscythe is a Rank VI Mark in Final Fantasy XII. The hunt can be undertaken after the storyline events in Draklor Laboratory are complete. Deathscythe can be found in the Cloister of the Highborn area of the Necrohol of Nabudis. According to Ma'kenroh in the Clan Hall, Deathscythe is a coward, and always preys on the weak.

Completing this hunt is one of the easier methods of obtaining a Soul of Thamasa, a loot item needed to make High Arcana at the Bazaar. Deathscythe is also part of the Jovy side quest in Nalbina.

Deathscythe is also fought in the Zodiac versions' Trial Mode in Stage 54 (alongside two Reapers) where the Black Robes can be uncommonly stolen from it.

Being a Reaper born of the abiding Regret and Lust for vengeance felt by those warriors who Perished in the destruction of Nabudis. It remembers its Patriotism even in Undeath, and so appears in Dreams, speaking words of Doom to those who would Disturb the Palace. The Merchant Popol who most unwisely looted a Corpse in the Necrohol has issued a Bill for this Mark so that he might again know Sleep's sweet embrace.

Necrohol of Nabudis (Cloister of the Highborn)
Condition: A player character has HP <10%

Necrohol of Nabudis (Cloister of the Highborn)
Condition: A player character has HP <10%

Deathscythe didn't use Death in the original Japanese version.

The party can block the Deathscythe's physical attacks with shields until the mark loses half of its HP, at which point it gains Ignore Evade. It will erect a Magick Wall at this time, preventing physical damage for two minutes. After the Magick Wall falls and Deathscythe's HP hits critical levels, its defense will increase, likely halving whatever damage that would have been done.

The player should first inflict Berserk and Blind on it and attack until the status effects wear off and it uses Magick Wall. The party can then cast Reflect on themselves and use Curaja to barrage the Deathscythe.

Power Armlets immunize against Stop. Having the MP-restoring and Remedy Lore augments from the License Board will help. Having a Holy Lance is a nice way to end the battle quickly, given the mark's weakness to Holy (Holy Lances can be bought from Balfonheim Port in the Zodiac versions). Using the Nihopalaoa+Remedy trick will render the mark unable to cast spells, become immobile and blind, so it will miss often with physical attacks.

Spells like Scourge or Shock are recommended during the Magick Wall period. 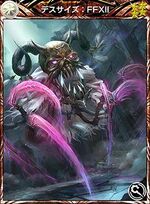 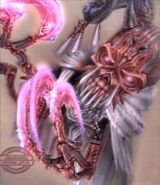 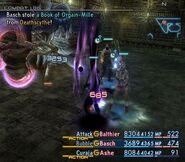 [view · edit · purge]Deathscythe refers to the large scythe appearing in the hands of the Grim Reaper. This stems mainly from the Christian Biblical belief of death as a "harvester of souls".