You'll meet this foe while flying in the airship. Uses Doom and Aero, then escapes. However, damage dealt remains, so you will eventually kill it.

Deathgaze, also known as Doom Gaze, is a boss in Final Fantasy VI. It can be difficult to find, as it hides in a random location on the world map of the World of Ruin and can only be fought by directly flying into it with the Falcon. Although the player can find it by randomly flying about, the most effective method is to land the airship and board it again so that the airship faces north. The player must then incline it a bit to the west or east and accelerate. This will take the player across every tile of the map, and while it will take some time, eventually Deathgaze will appear. The party will receive the Bahamut magicite when Deathgaze is defeated. Defeating Deathgaze in the mobile/Steam version earns the Wish You Were Here achievement.

World of Ruin, randomly encountered on the Falcon

World of Ruin, randomly encountered on the Falcon

World of Ruin, randomly encountered while riding the Falcon

Deathgaze has high HP, and depending on when the player fights him, the level of difficulty varies. It has Auto-Shell. Deathgaze opens by casting Lv.5 Death, instantly killing any party members with a level a multiple of five. It then uses Death, Blizzaga or a normal attack, and on its second turn Aero or Death. On its third turn Deathgaze has a two in three chance to flee.

The trick to defeating it is that Deathgaze does not recover its lost health when it flees, so the party can chase it around and weaken it over time. Until the player defeats Deathgaze it is recommended they save before flying the Falcon anywhere in case they encounter Deathgaze.

Firaga, Holy, and Ultima spells work well against it; so does Gau's Io Rage, which has Flare Star and will always deal 9,999 HP damage to Deathgaze. The Meteor spell is less effective, because of the high physical defense. Another useful strategy is to throw Flame Rods or Holy Rods since they ignore Deathgaze's high defenses and Auto-Shell.

In the SNES version, Deathgaze is easily defeated with the Vanish-Doom tactic, but using X-Zone on it with Vanish would prevent the game from recognizing him as beaten. Contrary to popular belief, this does not cause the player to permanently miss the Bahamut magicite; while they won't get it for that battle, Deathgaze's death script never running also means Deathgaze is not flagged as defeated, and continues to appear at random, so he will still give the magicite whenever he is beaten properly.

If attacked by anything: Attack (33%)

Deathgaze appears as a bonus boss.

Deathgaze from Final Fantasy VI appears with a wind-elemental card.

Deathgaze appears in the U.S. commercial for the Super Nintendo version of Final Fantasy VI, along with other monsters that resemble the Magna Roader. 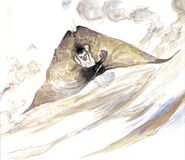 The battle in the iOS/Android version.
Add a photo to this gallery
Retrieved from "https://finalfantasy.fandom.com/wiki/Deathgaze_(Final_Fantasy_VI)?oldid=3420597"
Community content is available under CC-BY-SA unless otherwise noted.