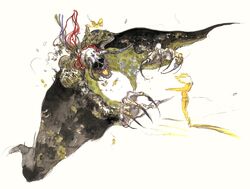 An outlaw who terrorizes the skies with its massive wings.

Deathgaze (デスゲイズ, Desugeizu?), also known as Death Gaze, Doom Gaze, Deathguise and Grim Gaze, is a recurring boss in the Final Fantasy series since its debut in Final Fantasy VI. It usually appears as a flying winged creature with skeletal features. Its attacks and abilities vary highly between each appearance, but it usually has a large repertoire of magical and physical attacks. As the name suggests, it often has access to an instant death ability, like Death, Kill and Level 5 Death.

The Death Gaze appears in the GBA/PSP/mobile versions in reference to its original appearance in Final Fantasy VI. It is the last boss fought in the Whisperwind Cove bonus dungeon.

Main article: Deathgaze (The After Years)

Deathgaze is a boss in the Depths of the True Moon. It can be fought in a random encounter.

Deathgaze is one of the sealed beasts released by the cataclysm, and may attack the Falcon while flying the skies of the World of Ruin. It yields the Bahamut magicite when defeated. The encounter is in a random part of the world map, so the player can fly the Falcon in a straight line with incremental movement to the side to find it.

Deathgaze is an Ahriman type enemy. 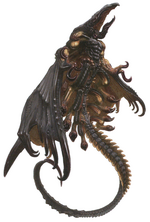 Deathguise is one of the last bosses and acts as one of Kuja's pets. It fights the party in the Crystal World, preceding Trance Kuja.

Grim Gaze (Death Gaze in the Japanese version) is an enemy that attacks with supersonic waves. 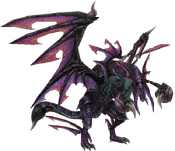 The Deathgaze is an Elite Mark fought on a skyferry's deck. Deathgaze reuses the design of an ordinary dragon (more specifically, a Plate Wyrm) and does not fly in battle. The player must find it randomly by boarding skyferries until it appears.

Deathgaze is a rare enemy found in rifts in Yaschas Massif -100 AF-. It is of the wyvern family, resembling an albino member of the species. It can daze and weaken a single target, following with Feeding Stoop to inflict extra damage.

Deathgaze is a family of enemies based on the Final Fantasy XII incarnation but with the notable difference that they are constantly in flight. Notable Deathgazes include Tyrant, a boss in Pharos Sirius, and the S-rank elite mark Zona Seeker in Western Thanalan.

In addition, the Final Fantasy VI version of Deathgaze appears as Deathgaze Hollow, serving as the first boss of the Dun Scaith raid.

Deathgaze appears as a boss in the standalone version of Final Fantasy XV: Comrades. It was added to the main game under the Expert Duel Crazy Challenge for the Google Stadia version, playable from the title screen.

In Chapter 13 of the main game, before the player heads into Zegnautus Keep, various flying entities patrol the skies of Gralea

Deathgaze is a boss in the Ruins. Its true form is that of Veriaulde. Being a mutated form of a Yuke, its design is far more metallic and machine-like than other appearances.

Deathgaze is an enemy in the data. There have been no reports of it appearing in any version, and therefore it is one of only a few enemies with a set of stats dummied from all versions.

Although the specifics of its data are unknown, it having assigned data is revealed as its name can be found in the files, unlike numerous other dummied enemy sprites which do not have an associated name. 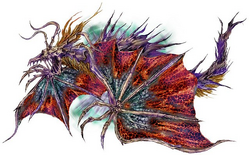 In the original free-to-play versions, both signets could only be obtained through the summon draw shop.

Deathgaze is a summon that casts Level 5 Death, which causes a Bravery Break to the opponent if their Bravery value is a multiple of five. The artwork used for the summon is from Final Fantasy IX. Deathgaze can be obtained as a Stage Bonus on the Destiny Odyssey VI storyline.

Deathgaze returns with the same function. It can be purchased from certain Moogle Shops for 40 KP.

Natural enemy of any airship, Deathgaze resides in the skies and appears just as unexpectedly as it disappears. It attacks airships without provocation and toys with its victims before departing with a sneer.

Deathgaze appears as an enemy, similar in appearance to its original form in Final Fantasy VI.

Deathgaze appears as an enemy in Battle Music Sequences.

Deathgaze from Final Fantasy VI appears as an enemy.

An airship and this winged dread would truly make for a nightmare at 20,000 fulms.

Deathgaze appears as an enemy on the Narshe Plains. It uses Aeroga and drops the Venom Claws. 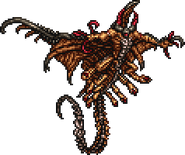 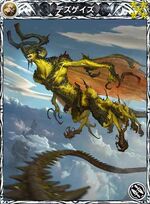 A Deathgaze appears in the Story Event "Talking to the Skies". When Cid and the dwarves propel their Airship for the first time, a turbulent storm imperils their goal. Cid jumps from the Airship and dons his armor fighting a Typhoon thinking it responsible for the deed. Eventually he discovers a Deathgaze to be the true responsible and defeats it, allowing the Airship to soar to the skies without obstacles.

Deathgaze was first revealed during the Japanese Version 2nd anniversary stream. It is set to appear as an enemy in the game as part of the collaboration with Final Fantasy VI.