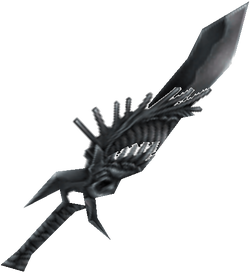 This sword brings death to all those who kill in the name of truth and justice.

The Deathbringer (デスブリンガー, Desuburingā?), also known as Black Sword or simply Black, is a recurring weapon in the Final Fantasy series. It is usually a sword of Dark power, which can also have the ability to instantly kill a foe.

A sword that casts Death when used.

The Deathbringer can be obtained in the Dawn of Souls and following remakes as a drop from Black Knight. It can be used as an item to cast the spell Death, and grants 33 Attack, 20 Accuracy, and +5 to Strength, Stamina, Agility, and Intelligence. It can be used by the Red Wizard, and is found in the Lifespring Grotto.

The Deathbringer (Black in the first US SNES release) is the strongest dark sword and has a chance to instantly KO some enemies. Cecil receives this weapon from the King of Fabul after the party's failed attempt at protecting the Wind Crystal from Golbez. It has an Attack of 30 and Accuracy of 40, and grants +5 to Strength, Stamina, Agility, and Intelligence, and -5 to Spirit. This weapon is metallic.

"Character" battles do not make use of normal physical attacks, but making it so reveals an interesting thing. If a character attacks physically, they'll use Cecil's Deathbringer, rather than the correct weapon as would be expected. If their AI script is altered to make use of physical attacks, said character will use Deathbringer. This might have been intended specifically for the Dark Knight battle atop of Mount Ordeals, which mirrors Cecil who would have been equip with his more powerful weapon at the time, Deathbringer, but decided to go with Darkness instead.

In the 3D versions, it has an attack power of 30 with an accuracy of 95 with the same properties as the 2D versions. Dark Knight Cecil can equip this sword, and if Golbez is hacked into the party, he'll be able to equip it as well.

The Deathbringer is a dummied-out weapon from Final Fantasy IV Advance that is still available for use via hacking, and could have been equipped by Dark Kain.

Any of Tidus's sword can be named Deathbringer if it has Deathtouch as its dominant ability. Deathtouch can be customized onto a weapon with x30 Farplane Shadow.

In the original PlayStation 2 version, Deathbringer is the third-strongest one-handed sword with an attack power of 90, and can be equipped by any character who has unlocked the "Swords 6" license for 60 LP. Swords are among the slower weapons.

It can be bought at Balfonheim Port for 16,000 gil and it has a 10% chance of instantly killing the target on hit. It can also be stolen from the rare game Ithuno in Barheim Passage, making this weapon notable, as the Barheim Passage can be accessed fairly early on, and the Deathbringer is notably more powerful than any other weapon the player has access to at this point. The Ithuno also respawns, making it possible to obtain more than one Deathbringer early on. Alternatively, it can be found in the Feywood and Subterra section at the Pharos in a randomly spawning treasure chest. It is also available via the Hunt Club and as a Bazaar item by selling Dark Crystal x10, Demon Tail x7 and Solid Horn x4.

In the Zodiac versions, it provides 83 Attack, 5 Evade, 32 CT, 5% combo rate, has a 12% chance of inflicting KO on a target, and requires the Swords 8 license for 80 LP. It can be bought in Balfonheim Port for 13,700 gil, found as a treasure in Feywood (The Edge of Reason), stolen Ithuno (3% chance), bought from the bazaar for 8,800 gil after selling Broken Sword x3, Demon Tail x7, and Dark Crystal x10, or from the Great cockatrice escape sidequest. It can be used by the Knight and Time Battlemage.

The Deathbringer is a

Dark Knights. It can be bought in Ishgard for 140 Centurio Seals acquired from the Hunt. An Antiquated Deathbringer was once required to upgrade to the Deathbringer but is no longer available.

The Deathbringer can inflict Doom upon hitting. It is exclusive to the Dark Knight job. It can be obtained via the Rendezvous in the PSP version and bought from an outfitters after beating the game once on the mobile version. It has an Attack power of 20.

A sword encompassing death itself. Its markings were engraved by an evil soul.

The Deathbringer is a weapon for Clavats. Its bonus ability when combined is to regenerate MP time by time per attacking the monster. Its counterpart is the Excalibur. It gives +170 Attack, and can be made with the Underworld Weapon scroll.

Deathbringer has 84 Attack Power, 20 Hit Rate, is Dark-elemental, and provides Attack +3. As a dark sword it can be equipped by Jobless and Dark Knights. It is found in Lufenia Ruins or bought from Braska for 14800g.

The Deathbringer is a level 92 weapon exclusive to Gabranth, which provides +63 ATK and increases EX Mode duration by 30%. It can be traded for at the shop for 29,570 gil, a Demonsbane, Goddess's Magicite x5, and Time Crystal x3.

The Deathbringer is a level 90 exclusive weapon for Gabranth that provides +63 Attack and +15% EX Mode Duration. It can be obtained by trading 158,000 gil, Demonsbane, Electrum, and Warrior's Dream x5.

This blade delivers a cold, callous death void of any compassion or remorse.

Deathbringer grants +6 to Attack. It can be equipped by Knight, Mystic Knight, Cecil, Bartz, Cloud, Squall, Seifer, Steiner, and Vaan.

A great sword that hails from ancient times which holds incredible destructive power, and was thus aptly named the "deathbringer" by those who witnessed it. Although many mistake this weapon as evil due to its ominous name, the blade itself is actually free of any curse. However, the great darkness that lives within it requires a great amount of spiritual discipline in order to be manipulated effectively.

Deathbringer is a great sword that provides 120 ATK, is Dark-elemental, and deals 50% more physical damage against humans. It is obtained as Dark Knight Cecil's Trust Master.

The Deathbringer has 5 more damage and Break Power and Magic than the Blank Blade, and additionally has two stars more Crit Chance in its first form. Additionally, its Auto-Ability is Wind Draw, moderately increasing the chance to draw wind orbs.

The Deathbringer appears as the ultimate sword weapon for Duran should he take the Dark most path of the Gladiator class, the Duelist. It has a ragged, haphazard, polished slate blade, its handle a twisted bone spiral hilt with a horned goat's skull facing the user as a handguard, and fit into its handle with a flesh and sinew like accented collar langet. It is a deadly accursed blade that yearns for the death of both its user and their enemies, and its polished blade is made to course the blood it spills into its langet to feed it as the glue that holds it together.

The Final Fantasy XIV incarnation of Deathbringer appears as a weapon as part of collaboration agreement between Square Enix and Sega. 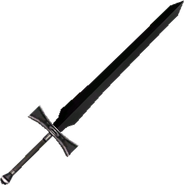 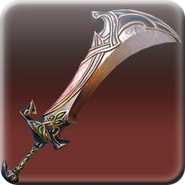 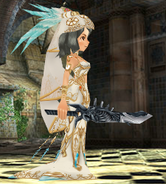